An extremely talented pianist, Eddie Heywood’s arrangement of Cole Porter's ''Begin the Beguine'' made his sextet one of the most popular jazz groups of the 1940’s. He also wrote the standard “Canadian Sunset,” in the 1950’s to add to his impressive resume.

Heywood received his first piano lessons from his father, also named Eddie, who was a well-known band leader in the 20s. Heywood joined his father, playing piano in the pit band at an Atlanta theatre. He also accompanied singers, including Bessie Smith, and thereafter worked in various small jazz groups, including those led by Wayman Carver, Benny Carter and Don Redman.

His gift for accompanying singers was displayed by his recordings with Billie Holiday and Alberta Hunter. In 1943 he took a sextet into the Cafe Society Downtown, being billed as the ‘Biggest Little Band in the Land’. The type of music they played, and their billing, placed them in direct competition with John Kirby but, thanks to the presence of Doc Cheatham and Vic Dickenson, they held their own.

From 1943 to 1947, Heywood rode a wave of popularity during which he was heard on radio and records with Bing Crosby and appeared in two films, ''The Dark Corner'' and ''Junior Prom.'' Heywood had a hit record in 1944 with an unusual arrangement of “Begin the Beguine” but his career was soon plagued by ill health. Suffering partial paralysis in his hands, he worked less yet continued to write and had successes in the mid-50s with “Canadian Sunset,” “Soft Summer Breeze,” and “Land of Dreams.”

Further paralysis developed in the 60s; however he persevered and was still writing and occasionally performing throughout the 70s and into the early 80s. Eddie Heywood passed in January on 1989. Show less 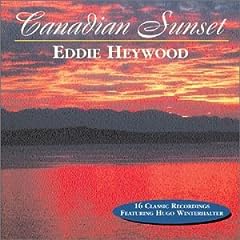 
An Affair To Remember

All About Jazz musician pages are maintained by musicians, publicists and trusted members like you. Interested? Tell us why you would like to improve the Eddie Heywood musician page.