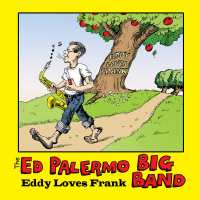 Eddy Loves Frank is the third album to feature the music of Frank Zappa as arranged by Ed Palermo and performed by the Ed Palermo Big Band. Speaking about Eddy Loves Frank, Ed says, "I'm prouder and happier than ever about this CD because I felt less constrained to follow Zappa's structural formats. It has never been my intention to replicate Zappa's recordings (what would be the point?) and with this new CD (my 3rd of Zappa music) I felt freer to manipulate the structures more than I ever have. I suppose it's a natural evolution."

Eddy Loves Frank features Palermo’s stunning, jazz-oriented arrangements of 7 Zappa tunes and a radical-yet- lovely (and very heartfelt) arrangement of “America The Beautiful,” which is the only song on the CD to feature vocals. Like his other recordings of Zappa arrangements, the CD is primarily instrumental; Palermo believes that without lyrics, “the songs are more spacious and have more of a jazz feel...the humor of Frank’s lyrics remain with the different instrumentations...” Despite the music’s complexity, Palermo’s incredibly skilled 17 piece band and three guest musicians play it with inspiration and apparent ease.

The Ed Palermo Big Band's recordings of the music of Frank Zappa have introduced Zappa's music and big band jazz to new audiences and generations. Eddy Loves Frank, a brilliantly original and entertaining album of big band jazz, shows that Zappa’s music has become assimilated into the American songbook. It also reveals that Zappa, as an American rock composer, deserves to be recognized with as much respect as America’s other revered popular music composers, including jazz composers such as Duke Ellington, Charles Mingus, Thelonius Monk, Oliver Nelson, and popular song composers such as George Gershwin and Cole Porter.

All About Jazz musician pages are maintained by musicians, publicists and trusted members like you. Interested? Tell us why you would like to improve the Eddy Loves Frank musician page.