E. J. Decker grew up the youngest in a musical household: his mother played piano; his father was a big band singer who sang briefly with the Tommy Dorsey Orchestra. His dad often played Big Band records at home, teaching E. J. the unique qualities of the various bands, and how they swung.

He also taught his number-three son how to sing at an early age. At the same time, E. J.'s older brothers were playing '50s and '60s rock, R&B and jazz without stop. In his teens, E. J. caught many of the great artists playing live in New York area clubs and concerts: Duke Ellington, Thelonious Monk, Leonard Cohen, Oscar Brown, Jr., Jimmy Smith, Alberta Hunter, Leon Russell, Richie Havens, Tom Rush, the original Dave Brubeck Qrt., Genya Ravan, Tom Paxton, the Jefferson Airplane and Sammy Davis, Jr. He learned much from all of them, stole much from most of them—and began finding his own voice.

E. J. sang lead in rock bands and R&B groups for many years, and spent others on the folk music circuit along the West Coast, playing festivals, ballrooms and cafés. During these years, he also acted often in theater and on television, appearing regularly during the 1980s on NBC's now-departed soap opera, “Texas.”

Back in New York, E. J. “came home” to his father's music, mixing it with the sounds he'd heard along the way. There, that lush baritone voice serves him well. E. J. glides easily from jazz through standards to rock to folk to '50s R&B and blues—he may well be the strongest, purest male interpreter of ballads of this generation—all while maintaining a consistency of sound and lushness of feel that marks it immediately as an E. J. Decker piece.

Reviewers and fans alike maintain, he definitely has his own sound. Given his background and approach, it's no surprise that E. J.'s style was once described as “biker Gershwin.”

His songwriting skills stand to the fore as well, as seen in his beautiful ballad composition, “(We're) Strangers Now,” which appears on his “While The City Sleeps...” album.

Recently, E. J. fronted a nonet for the Jersey Jazz Giants Tribute concert, honoring New Jersey natives Count Basie, Frank Sinatra and Sarah Vaughan. E. J. has sung in most of the jazz venues of New York, including: both the uptown and midtown Birdlands, The Bar Next Door, J's, The Garage, Creole, The Cornelia St. Cafe, Cleopatra's Needle, The Sugar Bar, The Squire, The Triad, Enzo's Jazz, The Savoy, The Bacchus Room, Chez Suzette, The Redeye Grill, Sweet Rhythm and Zinno's, among others. He is also one of the very few vocalists ever to be booked into that legendarily singer-averse Columbia Univ.-area jazz haunt, Augie's—which now lives on as the jazz club, Smoke.

E. J. is a member of Actors' Equity Association and is a voting member of the National Academy of Recording Arts and Sciences (NARAS).

E. J. served as president of the New York Chapter of The Jazz Vocal Coalition—a national organization, centered in Los Angeles—that during its five-year lifespan had a clear impact on raising the visibility and profile of singers, both within the jazz community, and within the music industry overall.

From 2005 – 2014, E. J. both produced and performed in The Heart of Jazz—a part of The September Concert for 9/11 (below)—where each year between 30-50 of NYC's finest jazz musicians gathered on September 11th to play their emotions about the attack on the World Trade Center and its aftermath here in NYC. Over those 10 years, more than 160 of NY's best stepped forward to have their say musically about our city's most horrid day.

Begun in 2002, and held each year until 2014, The September Concert was a non-profit organization which commemorated the horror visited upon New York City on September 11, 2001 by placing free music that day each year in parks, shops, office buildings, clubs and restaurants across New York's five boroughs. It brought together every genre imaginable, including amateurs and professionals, both to honor those we lost and to celebrate Life and raise our shared prayer for Humanity, by utilizing the full healing properties of music. There was never a charge for any concert. Show less

Press for BLUER THAN VELVET: THE PRYSOCK PROJECT (Releases April 13, 2018)

Chris Spector, Midwest Record, Lake Zurich, IL: ”After hearing Arthur Prysock bring the class, the die was cast. Hitting it out of the park here in the classiest of ways, Decker isn’t aping Prysock so much as he is following in his footsteps. One of the class acts of the past, this is a smoking way to make sure he’s not forgotten.”

Press for A JOB OF WORK: TALES OF THE GREAT RECESSION

Sheila Jordan, NEA Jazz Master ”You're definitely an original. You certainly are my taste! I just love your sound...”

Press for BLUER THAN VELVET: THE PRYSOCK PROJECT (Releases April 13, 2018)

Chris Spector, Midwest Record, Lake Zurich, IL: ”After hearing Arthur Prysock bring the class, the die was cast. Hitting it out of the park here in the classiest of ways, Decker isn’t aping Prysock so much as he is following in his footsteps. One of the class acts of the past, this is a smoking way to make sure he’s not forgotten.”

Press for A JOB OF WORK: TALES OF THE GREAT RECESSION

Sheila Jordan, NEA Jazz Master ”You're definitely an original. You certainly are my taste! I just love your sound...”

Shigeyo Hyodo, Jazz Page, Tokyo, Japan: ”You can amply feel the weight of his long career in his rich baritone and swinging vocals. ... This is a generous display of Decker’s talent, including his own arrangements on all tracks.”

Chris Spector, Midwest Record, Lake Zurich, IL: ”A wild set of quiet fire that has 'after hours' written all over it. Certainly a set to keep in mind when you want to encounter something completely different.”

Press for WHILE THE CITY SLEEPS...

Cadence Magazine: ”His presentation is lush, and his songs have a tinge of brash elegance. Decker has a way of presenting his tunes using dynamic flair, and he commands attention through his direct and forceful delivery. He seems to prefer singing lesser-exposed standards, and he displays a bold stroke of authority on each of them ... a solid entertainer.”

Craig Turner, WPNE 89.3 FM: ”... right from the first song, title cut, I knew I had a winner in my hands ... After repeated listens, I put this CD in the 'must have' category. It is one of those CDs that always puts you in a good mood.”

Jazz Improv Magazine: ”One is first struck by Mr. Decker's rich baritone voice ... His tone is resonant, his articulation immaculate. Mr. Decker's vocal inflection shows a clear understanding of the lyrics for each of his selections ... Similarly, he evidences a rich and far-reaching vocabulary of jazz and jazz influences. It is obvious, from the tune selection upward, that Mr. Decker is aware of the roots of this idiom.” 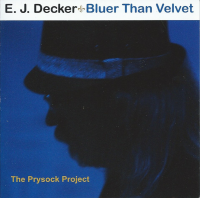 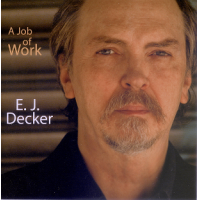 All About Jazz musician pages are maintained by musicians, publicists and trusted members like you. Interested? Tell us why you would like to improve the E. J. Decker musician page.