Swedish saxophone player Elin Larsson (born 1984) has been referred to as ”phenomenon”.

Her expressive and dynamic saxophone playing makes her one of the most interesting players on the Swedish jazz scene right now. 14 years old Elin started playing the saxophone and found her true voice. By the age of 20 she was accepted to the Royal College of Music in Stockholm. Elin’s carreer got started even before she graduated; debut album Live And Alive, released in 2009 with her own quintet Elin Larsson Group, was a major success in Sweden and was greeted with standing ovations from the press as well as from the audience. The success of the record also generated Elin the prestigeous Swedish Jazz Radio Award ”Newcomer of the year 2010”. 2010 Elin was picked out to play 1st tenor and represent Sweden in the EBU-project European Jazz Orchestra. During a period of three weeks the band performed a major tour in Europe.

Elin is also an active composer and is very respected for her composing skills, especially for her work with Elin Larsson Group. Today Elin is an after-sought saxophonist who has played at all major Swedish jazz festivals. Except from in Sweden, Elin has performed in Denmark, Estonia, Germany, Great Britain, Poland, Czech Republic, Italy, Slovakia, Slovenia, the U.S.A., India, the Gambia and Ghana.

Read more articles
”The interaction between Larsson and Persson is exceptional and the flexible and intelligent rhythm team accompany them with aplomb. //The Jazz Man

”One of the best albums of the year” //Dagens Nyheter 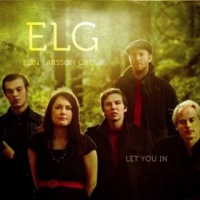 Elin Larsson
Let You In

All About Jazz musician pages are maintained by musicians, publicists and trusted members like you. Interested? Tell us why you would like to improve the Elin Larsson musician page.