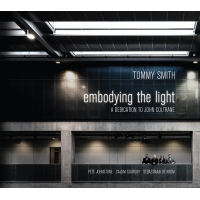 In April 2017, Tommy Smith and his new quartet went into the studio to record his first acoustic quartet album since 2005. The album's release will mark Smith's 50th birthday and the 50th anniversary of the death (17th July 2017) of one of his greatest inspirations, John Coltrane. The new group features Smith alongside one of the UK's leading young piano talents, Peter Johnstone, a former Young Scottish Jazz Musician of the Year and winner, with the group Square One, of the 2015 Peter Whittingham Jazz Prize. Bassist Calum Gourlay is a young veteran of gigs with Kurt Elling, Dave Liebman and John Scofield, and Sebastiaan de Krom has been the drumming powerhouse behind Herbie Hancock and Jamie Cullum.

All About Jazz musician pages are maintained by musicians, publicists and trusted members like you. Interested? Tell us why you would like to improve the Embodying the Light musician page.