Enrico was born in Clusone (Italy) in 1991. Fascinated by the saxophone, Enrico starts playing at the early age of eight years old. His first interest was classical music, which eventually led him to study with saxophone player and educator Paolo Camponuovo and study at “Luca Marenzio” Conservatory of Brescia in 2007, where he graduates in Classical Performance in 2011.

Growing up Enrico was exposed to many music genres that he now combines in his original works and arrangements. While his teenage years were devoted to improving his knowledge of classical music, he also developed a keen interest for rock, fusion, funk, progressive and heavy metal. Bands and artists like Weather Report, Brecker Brothers, Dream Theater, Frank Zappa, and many others left an everlasting mark in Enrico’s musical tastes and artistic sensibilities.

In 2008 he was featured as Alto Saxophone soloist in the European Union Youth Orchestra in two concerts in Darmstadt (Germany) and Bursa (Turkey).

During the Fall 2013, Enrico applied to the U.S. national competition JEN Student Composition Showcase and received an award for his composition “Convergence” in the category Small Instrumental Group during Spring 2014. During the same semester he received the Benny Golson Award from the Berklee College of Music Jazz Composition Department.

Since then, he’s worked as a composer, arranger, transcriber and band leader for numerous bands and artists, including jazz trios, 8-piece funk bands, pop-soul singers and various fusion bands. Most notably, in 2014 he worked as an arranger for Cluttered Clarity, band which has been extensively touring in Europe during Summer 2014 and has been featured as a performing act in the 2014 Montreux Jazz Festival.

In August 2016, Enrico moved to NYC where he currently resides in the pursue of his musical career. Less than a year after, in April 2017, Enrico released his debut CD Out of Place. The album showcases the wide variety of influences Enrico was exposed to during his many years of studies, featuring compositions that range from be-bop rhythm changes (Bahp!) to Impressionist Debussy-like ballads (Out of Place) and complex heart-pounding progressive tunes (Convergence, Virtual Proof). Show less 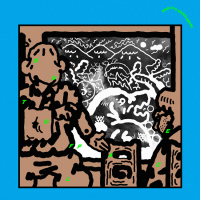 Enrico Bergamini
Out of Place

All About Jazz musician pages are maintained by musicians, publicists and trusted members like you. Interested? Tell us why you would like to improve the Enrico Bergamini musician page.