Enrico Merlin is one of those unusual cases of an accomplished musician and composer who is at the same time an acclaimed expert on the subject of 20th century music. These two worlds which rarely come together in a single person, have infused the artist with an exceptionally creative and expressive performing talent and at the same time have inspired numerous successful literary publications. As a musician he has played on more than 40 different recordings alongside artists such as Steven Bernstein, Giorgio Gaslini, Michael Manring, Markus Stockhausen, the Rova Saxophone Quartet, to name but a few, and has also performed at numerous international Music Festivals together with artists such as Carla Bley, Mederic Collignon, Garrison Fewell, Paolo Fresu, Mark Baldwin Harris, Lee Konitz, Joe Lovano, Boris Savoldelli, Maria Schneider, Giovanni Sollima, Elliott Sharp, John Surman, Steve Swallow, Henry Threadgill, Tino Tracanna, and many more besides. He has been the founder and leader of several bands including the Merlin UN-Covered Music Project which was recently selected by the Italian Jazz Magazine JazzIt to represent the new wave of Italian Jazz at Webnotte, a television broadcast hosted by Repubblica TV / Radio Capital TV. Worthy of note amongst his more recent musical endeavors are his solo guitar and electronics album Unframed... Straight Ahead! (a successful crowdfunding project); Pale Blue Dot (incidental music for the theatrical piece); a CD inspired to Frank Sinatra (seen as an alien being) along with Francesco Cusa, under the name Frank Sinapsi, Social Music with a sextet named Molester sMiles, and the guitar-duo Maledetti! with Valerio Scrignoli. He also writes music for the theatre and for documentaries and promotes, together with Andrea Brunello, an innovative form of interaction between words and sounds which they call Jazz Teatrale (Theatre Jazz). At the Fringe Festival of Edinburgh in 2013, Enrico performed for an entire month in the show The Principle of Uncertainty, and then in many european venues and at Next Einstein Forum in Kigali, Rwuanda, in 2018. From 2015 through 2018 he was elected one of the 10 best Italian guitar players by Jazzit Magazine readers.

On the musicology front, Enrico has an undisputed worldwide reputation as one of the most important experts on the music of Miles Davis. His comprehensive and painstakingly detailed catalogue of released and unreleased works, parts of which have been published both in written and in multimedia form (first and foremost the DVD A Different Kind of Blue – Miles Davis at Isle of Wight, Eagle Vision), led to his nomination back in the 90's by Gordon Meltzer (Davis' last producer) as the official discographer for the milesdavis.com website. In 1996 he was invited to the annual Miles Davis Convention, held in St. Louis at Washington University, where he presented a paper on the subject of non verbal communication and coded phrases. The transcription of the presentation was later integrated in a course at the Harvard University Extension School: Music E-145, Electronic Music, History and Aesthetics of Popular Music Since the 1960s. He has been the inspiration and guiding light for a number of multimedia exhibitions including I Suoni di Miles Davis for the Veneto Jazz Festival in 2006, Miles Davis, tra visibile e invisibile for Clusone Jazz in 2009, and Kind of Miles for I Teatri di Reggio Emilia in 2011. In September 2009, he published the book Bitches Brew – Genesi del capolavoro di Miles Davis, written with Veniero Rizzardi and published by Il Saggiatore. The book was subsequently translated into Spanish and published by Global Rhythm. In November 2012, he published 1000 dischi per un secolo. 1900-2000, (960 pages, Il Saggiatore) dedicated to the history of Western Music seen through the evolution of recording techniques and the innovation in musical languages. In December 2017 a new art-book is published: Miles Davis 1959 - A Day-by-Day Chronology, large format (12” x 12”), full color, 630 pages. A diary of Miles Davis' life and music through incredible research work on the international press, complete with exhaustive discographies, biographical facts, interviews, and musical analyses. Enrico holds regular seminars and workshops in many of the most important music schools and italian conservatories and in 2014 he became a member of the prestigious teaching staff of the Nuoro Jazz Seminars. He has also been the artistic director of the NonSoleJazz Festival (now known as TrentinoinJazz) from 2003 through 2016. Show less 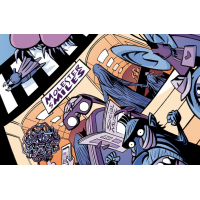 All About Jazz musician pages are maintained by musicians, publicists and trusted members like you. Interested? Tell us why you would like to improve the Enrico Merlin musician page.