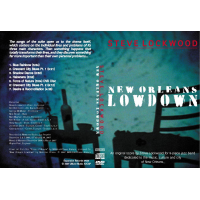 This album (reviewed in All About Jazz in 2004) contains self-produced compositions by the pianist. The Russell Arthur Roberts remarks on the back actually concern the first album that Lockwood released, called "Rite of Passage", but the same is true here. "His musical intellect and sense for drama........ combined into an appealing set of songs that suggest perhaps as much classically influenced 20th century art music as jazz." My wish here was to try to expand the bebop language to include a new approach to tonality/atonality that implies use of the jazz improvisers ear with singable melodies and a bi-tonal compositional approach.

All About Jazz musician pages are maintained by musicians, publicists and trusted members like you. Interested? Tell us why you would like to improve the Equipoise musician page.