Born into a musical family (his father plays bass, his mother and sister sing, and his older brother plays the drums and trumpet), Darius studied at Blake High School of the Performing Arts in Tampa, Florida, where he was a member of the Blake Jazz Ensemble and many other bands the school offered. In 1999, Darius and the Blake Jazz Ensemble were selected to perform at the Essentially Ellington Festival in New York City, where they placed fourth out of the top twenty jazz bands in the United States. While in New York, he had the opportunity to play with Wynton Marsalis and Paquito D’Rivera in a jam session. A year later, Darius performed in Japan with the Blake Jazz Combo as part of Florida’s Cultural Exchange Program. He has shared the stage with notable smooth jazz artists such as Rick Braun, Richard Elliott, Ken Navarro, David Benoit, Jonathan Butler, Warren Hill, Norman Brown, Chris Botti, Kim Waters, Chuck Loeb, and many others.

The title for saxophone prodigy Eric Darius' sophomore album couldn't have been more perfect--Just Getting Started.

Darius took the contemporary jazz world by storm with his 2004 Narada Jazz debut, Night on the Town. The critics raved! Fans clamored! Darius' awesome talent and unjaded enthusiasm for his music and where it was taking him made him an instant favorite everywhere he went. 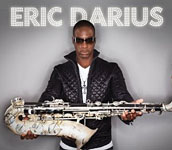 
Night On The Town

All About Jazz musician pages are maintained by musicians, publicists and trusted members like you. Interested? Tell us why you would like to improve the Eric Darius musician page.