Every once in a while, an artist comes along who changes everything.

Producing something completely new and meaningful, this person fills a void within the fabric of our culture--a hole we didn’t even know was there. Past generations have laid claim to this type of iconoclast--Liszt, Warhol, and Coltrane are among the artistic beacons of years gone by. Today, another joins their number--an innovator, musical revolutionary and unmatched performer: ELEW, aka Eric Robert Lewis. Fusing traditional jazz with elements of modern rock and pop, ELEW’s masterful originals and blistering re-interpretations have ignited the interest of the country’s tastemakers and those in the cultural know. But more than this, he possesses that ineffable spark that we only associate with true genius. Everything that he creates bears his singular mark--the stamp of something that we have never seen or heard, but have always wanted to feel.

A native of Camden, New Jersey, ELEW began his musical studies at a young age. After being granted a full scholarship to the Manhattan School of Music, he set his sights toward making noise on a grand scale. Upon graduation, he toured the world, recorded, and performed continuously with Wynton Marsalis and the Jazz at Lincoln Center Orchestra, Elvin Jones, Cassandra Wilson, Roy Hargrove, and Joe Henderson among others.

1999 offered a formal confirmation of what was rapidly becoming clear when ELEW won the Thelonious Monk International Piano Competition. It's a contest that goes beyond simply rewarding musical proficiency, instead recognizing the elusive combination of knowledge, command, passion and expression that define a true piano master.

Today, bolstered by his virtuosic quartet, ELEW has created a riveting new sound that is at once fresh and classic. In the jazz tradition of interpreting popular tunes of the day, much like Art Tatum and John Coltrane, ELEW manipulates and performs renditions of rock and pop songs by today’s top artists. A musical contortionist, his compositions twist, turn, and careen between styles, sounds, and emotions, resulting in a stunning aural experience. His new style is becoming so popular that his gigs are beginning to extend into the realm of film industry, opening new doors for his talent to be recognized.

Striking examples of form, nuance, and atmosphere, the works of Eric Robert Lewis (as ELEW is known when composing for film) can be found within a wide variety of cinema. In addition to scoring award-winning independent features like Pete Chatmon’s Premium and 761st, as well as Michael Kirk’s A Trumpet At The Walls Of Jericho, he has contributed music to Hollywood blockbusters like The Great Debaters. As commanding a presence on screen as he is on stage, he has made cameo appearances in Robert De Niro’s star-studded The Good Shepherd, the hit CW television series Girlfriends, and the film Caveman’s Valentine, starring Samuel L. Jackson. Lewis is currently scoring his first Hollywood feature: The Stage 6 (a division of Sony Pictures) 3-D horror film, The Dark Country, directed by and starring Thomas Jane. Additionally, the Joffrey Ballet has commissioned an all-new ballet based on Eric Robert Lewis's original composition “Puerto Rico,” and he is also composing a 30-minute piece of music for the Alvin Ailey American Dance Theatre.

ELEW's passion for creation knows no boundaries, whether they be those of genre, discipline, era, or medium. A true Renaissance man, he is the voice of a new generation--with one foot firmly planted in the past, and the other striding into the future, he precisely captures the disposition of an age where looking backward is often the same thing as looking ahead. Show less 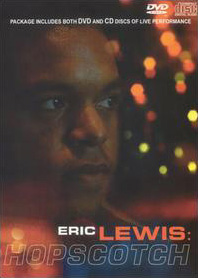 All About Jazz musician pages are maintained by musicians, publicists and trusted members like you. Interested? Tell us why you would like to improve the Eric Lewis musician page.