Eric Starr is well known as a drummer, and drummers are meticulous. There are rules in drumming that go beyond the obvious. Keeping a beat is not everything. Yet Eric is also a composer, and what truly distinguishes his music is its inventiveness - he's not limited by any kind of convention. While that may seem like a paradox, it's not: Eric's training and experience as a drummer have allowed him a freedom and an ability to compose in a way that's uniquely his own.

Eric started playing the drums at the age of six; his father, a trumpeter, toured with the Tommy Dorsey Orchestra under the direction of Buddy Morrow. “I remember watching the drummer really swing, and that changed my life.” His first taste of live performance was when he and his brother Nelson climbed on stage to jam after a Dorsey concert . The audience, still in the ballroom, started cheering. “We just ate it up. I even signed an autograph that night; a guy who worked at the hotel came over to me with this thick book and said 'See this? This is Buddy Rich's signature. I want you to sign right next to his name.' I don't know if I deserved that - but I sure had fun that night.”

By eight, Eric was writing music. Today, at 32, he explains his passion for writing by quoting playwright Arthur Miller. “Miller said something like, 'we create art because we're trying to make order out of internal chaos,' and that concept describes why I write. It's something that's in me; it's instinctual.”

“Much of the music that I compose comes from my dreams,” Eric continues. “I look at music in a very spiritual way. It's like I am a sculptor with a block of wood. I chip away at the wood and the object I'm creating reveals itself to me. It's almost more that I'm channeling than writing.”

Eric's debut release, “She,” is a stunning document of his skills as a songwriter and as a musician. Recorded in New York and London with a gifted group of musicians, the CD's songs are evocative, passionate and assured. While it's tempting to describe Eric's style of composition as stream-of-consciousness, that's really not the case: the songs are well structured and concise. It's only the inspiration that's stream-of-consciousness. “Music is all around us. It's in nature, it's in the wind, and it's in urban life - the sound of cars and traffic and airplanes,” Eric says.

Vocalist Nelson Starr, who is Eric's older brother, is featured on most of the album's six tracks. “Nelson's voice is an integral part of the overall sound of this group,” Eric explained. “Many of these tunes contain difficult melodic twists and turns. Given this, I needed to find a really skillful singer. I also needed to find somebody who would be sensitive to the material.”

The CD also features multi-saxophonist Iain Ballamy, a pioneer in Britain's modern jazz movement, known for his work with Bill Bruford the late Gil Evans, Django Bates and others. “I've known about Iain since I was probably fifteen. I grew up listening to his music,” Eric says. “His musical ideas are quite profound, and he has a strong vision. When I listen to him play, I don't hear ego, I hear a kind of musical purity. This is beautiful to me.”

Eric's equally excited about the contributions of guitarist Dominic Miller, best known for his work with Sting. (He convinced Dominic to record with him by traveling to Miller's native England, and showing up unannounced at one of Dominic's performances.) “Sting had a huge influence on my life musically,” Eric notes. “ And I always really liked Dominic's approach to Sting's work. He's from Argentina, and that informs his style; it's a wonderful guitar culture.”

Others on the album include the fiercely talented Kenny Ascher, who played piano on “Tender Night,” and is best known for his Academy Award nominated composition, “The Rainbow Connection.” Finally, Nelson Starr, Sr., Eric's father, plays a wonderful flugelhorn solo on “La'raesa.”

The songs on “She” include “Wakangli,” a meditation on American Indian courage and resilience, particularly amongst the Lakota Sioux. “I was tremendously moved by the story of Wounded Knee, and the strength of Sioux women. I tried to create a little of the warrior mentality in this song - when I hear it, I can hear buffalo running through the prairie,” Eric explains.

One of the CDs highlights is “Warm at Heart,” a song written in the days following 9/11. “I was grieving, and I needed to put that grief into a song. But I didn't want the song to be attached to that specific moment; I wanted it to be universal.” Without doubt, though, one of She's most stunning tracks is “Tender Night,” a song influenced by Richard Hawley's dour “Late Night Final.”

Anchored by Eric's drumming, the performances on “She” are magnificent, but the performances are made magnificent by the material. “It's a strange process, writing music, but it's lovely. It's less about intellect and more about intuition. I just try to feel, and let ideas move and refract through me. I structure those ideas as best I can, in a way that I think will be meaningful to the listener,” Eric says.

In between writing, performing, and recording, Eric was recruited to author “The Everything Drums Book,” published in 2003 by Adams Media Inc. (In addition to a degree in music, he also earned a Bachelor's degree in English and worked briefly as a music journalist and a playwright -- two of his plays were produced in Manhattan.)

“Writing the Everything Drums Book was a great challenge because I had to immediately think about what drumming means to me and what it should mean to readers,” Eric says. “I've taught a lot - I've had hundreds of students over the years - but I had to rethink everything in writing this book. I tried to take myself out of the equation and talk about the vast musical world in which we live; it's a world filled with diverse people and many different approaches to music.” 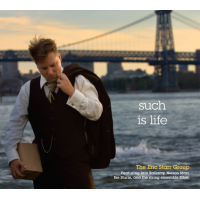 Dream Me Part I

Eric Starr
Such is Life

All About Jazz musician pages are maintained by musicians, publicists and trusted members like you. Interested? Tell us why you would like to improve the Eric Starr musician page.