After a long hiatus, the Eric Starr Group is back with a brand new album entitled Such is Life. The album includes 10 new tracks by Eric and features Nelson Starr on vocals, piano, and guitar, Iain Ballamy on tenor saxophone, Ike Sturm on bass, and Eric on drums, vibes, and percussion. Also, special guests ETHEL (string ensemble) appear on five tracks. All of the songs, lyrics, and orchestrations are by Eric.

THE STORY OF SUCH IS LIFE Recently, Eric completed work on a new batch of material. Culling elements of jazz, classical, and bossa nova, this new songbook was begging for the kind of powerful, precise, treatment that only ESG could provide. “I reassembled the group specifically to record these new works,” explained Eric. “The idea was to record a jazz quartet live in the studio, then add orchestral arrangements later on.”

“Usually musicians are responding to previously composed orchestrations. In this case, the orchestra answers the players,” added Eric. This recording approach, while unorthodox, proved a perfect fit for Eric’s new material, which is a combination of carefully crafted melodies and spontaneous improvisation.

Such Is Life takes listeners on a musical journey to both recognized and unchartered territories. For example, “Can Spring Be Far Behind” recalls the glory days of bebop while “The Conjuror” is a seductive bossa nova with vocal. The most ambitious piece on the album, a two-part composition called “Dream Me,” starts out as a Jobim- style number before morphing into a rocking vamp with lush orchestrations and a searing violin solo.

The innovative string ensemble ETHEL deftly performed Starr’s involved arrangements on the recording. “When I asked [ETHEL'S 1st violinist] Cornelius Dufallo to play the complex solo I had composed for “Dream Me, Part II” he made the impossible possible. Few violinists could have played this solo quite as skillfully,” extolled Eric.

In all, Such Is Life is a grand amalgam of jazz styles and compositional elements pulled off with just the right amount of cool, experimentation, compelling execution, and poise. Each track bristles with deep purpose and inspiration. Show less

“One cannot help but be impressed by this music. The musicianship is top- notch, the performances unpredictable and full of surprises, and Eric Starr’s writing is consistently inventive.” -Scott Yanow, Jazz Critic 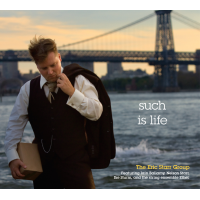 All About Jazz musician pages are maintained by musicians, publicists and trusted members like you. Interested? Tell us why you would like to improve the Eric Starr Group musician page.