Singer and producer Eric van Aro has a highly cosmopolitan background. He is the son of an Italian mother (the singer Caterina Valente) and a German father (the juggler and producer Erik van Aro Sr.), grew up in Switzerland and England, but in particular comes from a family of musicians and artists going back eight generations – a strong tradition that he has always deeply felt a part of since he was born. Following a wide range of experiences studying and working in theater dance and image consulting services for actors and singers, Eric van Aro found himself developing his own artistic personality. This dimension led him to host successful radio shows and appear as a musical guest on various television shows in Italy, Switzerland, Germany and Austria.

His passion for the theater and love of live concerts resulted in Eric van Aro taking his tour “Freunde-Amici- Friends” around the major European capitals during the early ’90s. At the same time, Eric landed the role of “Captain von Trapp” in the Swiss production of the musical “The Sound of Music”.

In 1998 he founded Eraki Entertainment, an independent record label and production company which aims, amongst other things, to produce projects characterized by an intrinsic musical quality, often bringing together artists from very different backgrounds. A perfect example of an ERAKI production is the highly successful album “GIRLTALK” (2001), collaboration between Caterina Valente, the harpist Chaterine Michel and the arranger Gianni Ferrio, which has received great reviews from critics and the public around the world!

In 2001 he released his album “from the heart”, a collection of songs dating from the mid ’20s t the end of the last century that covers different styles including valse musette, world music, country & western, jazz, nursery rhymes, rap and hard rock.

“Friends”, the CD released in 2005, contains collaborations with musicians of the caliber of trumpet player Franco Ambrosetti, harmonica player Bruno de Filippi, drummer Flaviano Cuffari and many other Italian jazz and rock musicians. The album has won over the public and critics worldwide, establishing Eric van Aro as one of the most interesting and accomplished singers to have appeared on the jazz scene in the past few years.

With the release of DESERT MOTEL in 2008 Eric returns with an intriguing selection of songs from such tune-smiths as Winwood, Stills, Manilow, Webb and Metheny for a sublime musical “on the road” experience

In summer 2010 Eric changes style and with the Beats4life label the first song JAZZ (a collaboration with Marco Soundee one of Italy’s major house music creators) is released in its various mixes and remixes to major acclaim from DJs worldwide. LoveUmadly, The painting in my heart 2010 remix and UR are just a few of the other exciting songs from the Soundee/vanAro/Beats4life stable that have audiences dancing all over the world.

Meanwhile Eric’s COLLABORATIONS project for the ERAKI label is on its way and the first two songs have been released. Luca Verde, one of Italy’s major rock guitarists and producers gave the famous French ballad Le blues du businessman a hard rocking arrangement which Eric performs in its original language while Mel Torme’s The Christmas song received an exciting Latin Jazz treatment with the fabulous IGUAZU acoustic trio backing the singer.

2013 will see the release of the OBSESSION album an exciting collaboration with jazz pianist Fabio Gianni as well as the first “THE EGH PROJECT” deep house/lounge album. So… there is a lot to look forward to! Show less

A certified jazz crooner who knows how to make a song come alive! Franceso Emanuel “ The Muses Muse “ USA 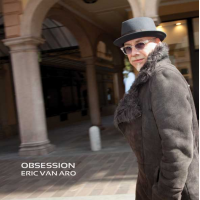 All About Jazz musician pages are maintained by musicians, publicists and trusted members like you. Interested? Tell us why you would like to improve the Eric van Aro musician page.