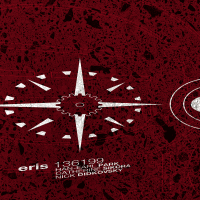 Formed in New York in 2012, Eris 136199 is the quick-reacting cyborg virtuosity of Han-earl Park (Sirene 1009), the mighty melodic imagination and big tenor sound of Catherine Sikora (Clockwork Mercury), and the diamond-cut precision and grind-meets-experimentalism of Nick Didkovsky (Doctor Nerve). Recorded during the 2017 European tour, Eris 136199’s eponymous album is the trio’s followup to their debut recording Anomic Aphasia (SLAMCD 559, 2015) which was described as “a beautiful noise” (KFJC 89.7 FM) and “atmospheric as to become almost frightening” (The New York City Jazz Record). Han-earl Park variously occupies the role of Eris 136199’s drummer, bassist, and second horn-player. He is the instigator and mastermind behind Eris 136199, as well as groups like Sirene 1009 (with Dominic Lash, Mark Sanders and Caroline Pugh), and co-conspirator in projects with Richard Barrett and others. Park is navigator-engineer of the interactive, with playing that is by turns accommodating and interventionist. Changing direction and turning on a dime, Park demonstrates, with little more than a guitar, volume pedal and amplifier, a mutable, physical virtuosity. In contrast, Nick Didkovsky creates anthems of glitch and distortion, playing the (analog and digital) signal chain from vibrating string to vibrating speaker via pedals and tube saturation. Demonstrating a deep understanding of rock, noise and experimentalism, Didkovsky rides the line between process-based mutations and heavy-rock riffage. Best known for his avant-metal big band Doctor Nerve, Didkovsky is also an active composer, working with ensembles such as Bang On A Can All Stars, ETHEL, and the Meridian Arts Ensemble, and the author of Java Music Specification Language, a system for algorithmic composition and real-time computer music. Completing the trio is improviser, composer, saxophonist Catherine Sikora. Seated stage-center, Sikora brings a deep melodic and harmonic intelligence to the performances. In addition to long-standing collaborations with Eric Mingus, Christopher Culpo, Stanley Zappa, and Brian Chase, Sikora’s big, bold sound, and extraordinary melodic sense, has been in demand with artists such as Enrique Haneine, Elliott Sharp, and Ross Hammond. That same sound and technique grounds Eris, simultaneously rooting it in tradition while continually stepping beyond its borders. Recorded with clarity and punch by Troels Bech and Charlie McGovern, and beautifully mastered by the amazing Richard Scott, the album presents two near-complete sets; from earlier in the tour (Copenhagen), and from the final date of the tour (Newcastle). 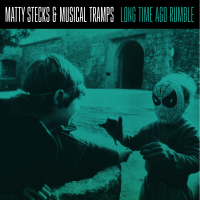 All About Jazz musician pages are maintained by musicians, publicists and trusted members like you. Interested? Tell us why you would like to improve the Eris 136199 musician page.