Etta Baker of Morganton, NC, was born in 1913 and began playing guitar at the age of 3. She was the premier female Piedmont blues guitar instrumentalist, playing the guitar everyday, and constantly working on new arrangements until just a short time before her death in September of 2006. Until her passing at the age of 93, Etta maintained a beautiful yard and garden and was matriarch of the 108 members in her family.

Both her parents played several instruments, and she had picked up a guitar at the age of 3. “I was so small, I had to lay the guitar on the bed, stand on the floor and play on the neck,” she later recalled. Her seven brothers and sisters also played, and at an early age she was performing old-time breakdowns, waltzes and two-steps with them on family and local community occasions.

By the late 1920s she was highly proficient on the six and twelve-string guitars, and she had mastered the Piedmont blues style; popular across the southeastern states of America this style was softer and more melodic than the more guttural Mississippi blues, which had developed in the harsher landscape of the Delta. Yet, like many traditional musicians of her era, playing was not a career but something she did for personal satisfaction and for the pleasure of her immediate circle.

On a summer day in 1956, Mr. Boone Reid of Morganton, NC took his family to nearby Cone Mansion. The brilliant folksinger Paul Clayton happened to be walking the grounds with his guitar. Mrs. Etta Baker remembers, “My daddy asked Paul to let me play One-Dime Blues. He was over the next day with his tape-recorder.”

Clayton issued these pieces on an album that became among the most influential recordings of the folk era, Instrumental Music from the Southern Appalachians on Tradition Records. Etta’s renditions of “One-Dime Blues” and “Railroad Bill” became standards at the height of the folk music revival in New England. Taj Mahal a student at UMASS in the early 60s first heard this LP in a college dorm: “I was immediately taken by her version of Railroad Bill. She is the greatest influence in my guitar playing.” Etta had numerous offers to perform but did not go because, “My husband could play piano real well, we could have made it, but he did not want to leave home.”

Paul Clayton had a cabin outside of Charlottesville, VA, and he would bring his musician friends down from the New York folk scene to visit Etta. Paul, a friend to Bob Dylan brought Bob and Susie Rotolo to visit Etta in 1962 to celebrate Bob’s 21st birthday. Bob soon after rewrote Clayton’s song “Whose Going to Buy You Ribbons, When I’m Gone,” into “Don’t Think Twice, It’s Alright,” in which you can clearly hear Etta’s guitar influence.

In the 1980s, after the death of her husband, Lee Baker, she began finally to accept invitations to perform beyond the borders of Caldwell County. Although in her seventies, she went on to become a much-loved attraction on the folk and blues festival circuit, appearing all over America and even touring Europe. For the first time she secured copyright control of her early field recordings and in 1991 recorded her first studio album, “One-Dime Blues.” It was followed in 1999 by “Railroad Bill” and in 2004 she recorded an album with Taj Mahal, who had first heard her recording of “Railroad Bill” in the early 1960s and had been performing it ever since. Her final recordings, made when she was 92, appeared on the album “Carolina Breakdown” in 2005. 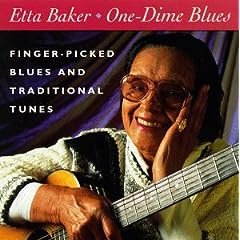 All About Jazz musician pages are maintained by musicians, publicists and trusted members like you. Interested? Tell us why you would like to improve the Etta Baker musician page.