EUGENE GREY is an internationally traveled and acclaimed Jamaican guitarist, arranger, composer, and music educator. According to Rootz Reggae & Kulcha magazine, “Eugene Grey is yet another of the many genius guitarists of world class status that Jamaica has produced” playing professionally from the age of 14. Eugene has toured worldwide as lead guitarist with such artists as Grammy Award winners Burning Spear and Toots and the Maytals, Sly and Robbie as well as Culture, Fab 5, and the internationally acclaimed Kid Creole and the Coconuts. Other artists Eugene has performed with include Max Romeo whom he toured with for the first time in Europe, Horace Andy, Big Youth, The Harlem Renaissance Orchestra, America’s Singing Poet Steve DePass, West Africa’s Abdou M’Boup and Vieux Diop, Tony Cafresi and His Latin Orchestra, The Wailers, and The Skatalites.

Another aspect of Eugene’s career included performing as musician in theatre musicals. He was a member of the orchestra in the Off-Broadway play “In A Pigs Valise” in 1989; “Pecong” in 1991 at Newark Symphony Hall and the Off Broadway Classical musical “Sally and Tom” at Castillo Theatre in 1995/96. He was Musical Director for the Off-Broadway musical “Rasta” in 1995 as well as in 2004 for Irving Burgie’s musical revue “Day-O” at the Stratford East in London. Eugene had years earlier arranged 42 of the original songs of his longtime employer, Irving Burgie for this Broadway Musical review that were made famous by Harry Belafonte.

Eugene's extensive professional music experience coupled with his B.S. degree in Music Composition led him to be offered a Music Educator position in the Broward County Florida School system. He served four years teaching at several elementary schools and was presented with an Outstanding Service Award. During that same time the North Broward Medical Center presented a special award to his music program for participating in their 40th Anniversary Celebration.

In 2011, Mr. Grey co-founded with his wife Felicia Grey, the 501 (c) (3) non-profit organization, Rootz of Music, Inc., an organization dedicated to providing free music education and cultural enrichment programs to youth in under-served communities such as SOS Children’s Villages – Florida Inc., an institution providing care to children facing challenges with family support. Rootz of Music, under the leadership of Eugene Grey has been making a positive impact on the lives of under-served young people in our community. One of the goals of the organization is to preserve the historic story of Jamaica’s popular music through a series of presentations called American Roots of Jamaican Music at various Elementary, Middle and High schools. Eugene wants to use academia to preserve culture creating the blueprint for a curriculum in Jamaican music from Mento to the present genre. He is writing a book to highlight Jamaican musicians that have not been mentioned or mentioned very little.

Rootz of Music, Inc., with funding in part from a grant from the Broward County Florida Cultural Division, produced its 1st Annual Fundraiser show American Roots of Jamaican Music: The Legacy on October 25, 2015 at the Broward Center for the Performing Arts to a sold out crowd. The 3rd annual show in 2017 held at the Pompano Beach Cultural Center introduced its first Jamaican Music Excellence Awards ceremony honoring music icons Dennis Sindrey, Eric Monty Morris, Charley Organaire, Larry Marshall, Evrel Grey, Horace Forbes and Larry McDonald. Mr. Grey also performs with his group locally and internationally. More recently, Eugene opened for Third World and performed with Myrna Hague on her “Simply Myrna” show in Florida. Mr. Grey brought his Jazz Reggae style to the Ocho Rios Jazz Festival in Jamaica on June 2016, where he performed for the first time since leaving the island for 40 years. He also brought his American Roots of Jamaican Music presentation at Mico College in Kingston. Eugene has been performing in Buenos Aires since 2007 and most recently completed a successful one-month long tour in 2013 to sellout crowds at venues from Buenos Aires to Nuequen, backed by the local band Sessiones Reggae Instrumental. By special invitation of the Province of Patagonia Argentina he also conducted music workshops as part of his nonprofit organization. 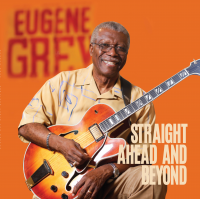 All About Jazz musician pages are maintained by musicians, publicists and trusted members like you. Interested? Tell us why you would like to improve the Eugene Grey musician page.