With her lavishly praised 2013 debut album Black Lace Blue Tears under her belt, late-blooming jazz vocalist and composer Eugenie Jones immediately faced questions about whether she was a one-hit wonder or a real contender. Sure, she displayed quick rhythmic reflexes, a silken tone, and real songwriting savvy, but did Jones have what it takes to go the distance, to sustain a career in jazz’s cruelly competitive ring.

Her even more impressive second album, Come Out Swingin’, makes a persuasive case for Jones’s status as a heavyweight talent. Seasoned by several years of steady work following the release of Black Lace, the Seattle-area singer displays the rhythmic authority, emotional insight, and melodic invention of an artist who can hold her own in any company. “With Black Lace Blue Tears behind me I wondered, was that a fluke? Do I really have a gift, can I continue? Almost immediately I started writing again,” says Jones, “and put those questions to rest. This CD was a deliberate attempt to continue to grow and progress. I set that desire for improvement as a bull’s-eye to shoot for and kept that focus through each step of this project.”

“Seattle-based vocalist Eugenie Jones may have been a latecomer to the jazz world, but she displays the seasoned sensibilities of a jazz lifer on her sophomore release, Come Out Swingin'. The follow-up to her well-received 2013 debut album, Black Lace Blue Tears, the album more than lives up to its title, showcasing Jones' smoke- and-satin vocals in settings that float like a butterfly and swing like a night at the Savoy. Beyond her instantly engaging vocals and sharp rhythm instincts, Jones also happens to be a topflight composer, penning both melodies and lyrics to tunes that are completely at home in the jazz idiom. She enlists a sharp group of musicians to back her up, including pianist Bill Anschell, bassist Clipper Anderson and drummer D'Vonne Lewis. Jazziz Magazine

“In that overcrowded arena known as “female jazz singers”, Seattle-based Eugenie Jones manages to stand apart from the crowd. Ms. Jones has filled both of her outstanding albums with her own engaging compositions. This fact alone differentiates her as she is one of the very few African-American women singer- songwriters in jazz today. And finally, the lady can sing as well as she can write... Eugenie Jones has released two first-rate albums in the last three years and she is an intelligent, thoughtful composer in the tradition of Abbey Lincoln and Nina Simone. Fans of true jazz singing, it’s time for you to sit up and take notice.” Curtis Davenport Curt’s Jazz “Best of 2015”

Black Lace Blue Tears...”This is an impressive debut recording by a singer who didn’t begin to work professionally until a few years ago. A West Virginia native who is now based in Seattle, Eugenie Jones brims over with confidence and authority. She sings a number of originals that are invested with aplomb and relish. Ennui, musical deconstruction, primal screaming, horn envy and emotional exhibitionism are not part of Jones’ musical vocabulary. Her strong suit is rhythm and swinging….Her medium-dynamic alto brings an unforced lyricisim to Paul Desmond’s “Take Five. 3.5 Stars” Kirk Silsbee DownBeat Magazine

​​​”A debut release is usually feast or famine and to include nine originals is going all in on your talent. Something tells me the smart money goes on the success of Eugenie Jones and Black Lace Blue Tears. .... full of passion and raw emotion and is that rare breed of artist that sidesteps pretentiousness and allows the music to take center stage. Highly entertaining! 4 Stars.” Brent Black Critical Jazz

“I was looking for quality musicians and personalities that would mesh with my own,” Jones says. “Already having had great experiences with the other musicians, I added Jay for his enormous talent and newcomer D’Vonne Lewis for his smooth, yet intense playing ability.” In this high-energy swing project, it doesn’t take long for the musicians’ combustible chemistry to ignite.

Like her first album, Come Out Swingin’ focuses on Jones’s original songs. She announces her rhythmic agenda with the first track, “Swing Me,” a self-possessed celebration of unbridled desire. Her brief, exciting version of the standard “All of Me,” almost serves as a thematic preamble to her slinky “A Way About You,” a song that could easily be mistaken for a sophisticated piece of Bacharach/David. Jones cast a wide net when it comes to finding inspiration as a composer. She takes the smoldering up a notch with “Sweet Summer Love,” a song that emerged after watching Marvin Ritt’s moody and sweat-streaked 1958 film The Long Hot Summer, a kind of mashup of Faulkner and Tennessee Williams. Her love of cinema returns on “Rain Rain Don’t Go Away,” a seductive song about self-comfort that never lapses into self-pity. She’s at her most sleek and self-assured on “I’m Alright,” a soulful declaration of independence propelled by some tasty D’Vonne Lewis samba-fused trap work. Show less

Seattle Washington is perhaps the best kept secret in jazz. When asked to name the jazz hot beds in the United States the usual suspect top the list in New York City, Chicago, New Orleans, Kansas City and to a slightly lesser extent Los Angeles. The city of Seattle can boast Jelly Roll Morton, Ray Charles and Quincy Jones and that is just scratching the surface. The jazz scene in Seattle is alive and well with the debut release from Seattle native vocalist Eugenie Jones. Black Lace and Blue Tears will street on May 28th 2013 and continues in the fine tradition Seattle has become famous for.

Seattle Washington is perhaps the best kept secret in jazz. When asked to name the jazz hot beds in the United States the usual suspect top the list in New York City, Chicago, New Orleans, Kansas City and to a slightly lesser extent Los Angeles. The city of Seattle can boast Jelly Roll Morton, Ray Charles and Quincy Jones and that is just scratching the surface. The jazz scene in Seattle is alive and well with the debut release from Seattle native vocalist Eugenie Jones. Black Lace and Blue Tears will street on May 28th 2013 and continues in the fine tradition Seattle has become famous for.

Nine of the eleven tunes on the release are original compositions showcasing the unique individuality and style of a vocalist with mad skills and unlimited potential not only as a singer but as an accomplished lyricist. A near perfect ebb and flow permeates the release as Jones makes that transition from straight ahead singer to lyrical poet look effortless. The original “All The King's Men” is a ballad that will tug at the heartstrings of even the most cynical critic while the covers of “My Funny Valentine” and the Paul Desmond gem “Take Five” are joyous reharms that breath new life into some timeless classics. The joyous “A Good Day” is another Jones original which opens the release and sits the table for an incredibly entertaining outing performed by a vocalist that should start turning some heads in short order. Brent Black @Critical Jazz

Jones, “has a voice that covers words like pieces of silk covering precious stones. But she never overdoes it, never overflows with emotion, never goes too high or too low, but always sings with a restraint that’s cosmopolitan, yet not soulless. Charles Mundede, Associate Editor, The Stranger, Seattle, WA 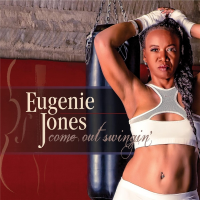 I Could Get Lost In Your Eyes

All About Jazz musician pages are maintained by musicians, publicists and trusted members like you. Interested? Tell us why you would like to improve the Eugenie Jones musician page.