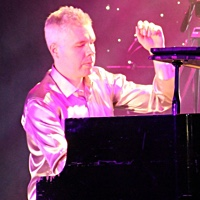 Evan Whitfield is a pianist, keyboardist and composer of styles ranging from jazz to experimental new-age to contemporary improvisation. Evan began his musical education at the age of seven, studying classical piano and brass. Born in Calgary, Alberta, Canada, Evan was raised in a musical family from the very beginning and remembers listening to Vivaldi’s The Seasons, The Beatles‘ album Sergeant Pepper‘s Lonely Hearts Club Band, Glen Gould playing Bach, and attending Kenny Rogers concerts. As soon as he was proficient at the early stages of classical piano, he chose to study another instrument, the tuba. Thereafter his musical training developed with the repertoire of Bach, Beethoven, Schubert, Debussy, and the English Renaissance composers such as Dunstable and Purcell. As well as performing recitals at churches and schools, Evan studied with members of the Niagara Symphony Orchestra and won several International Royal Conservatory competitions. After fifteen years of living in Ontario, Canada, Evan emigrated with his family to the United States of America.

After moving to the United States, Evan gave piano recitals in the Southeastern United States while finishing his BM studies at Virginia Commonwealth University. During this time Evan traveled to Rome, Italy, performing with the Rome Festival Orchestra, and in his last year of graduation, Evan won first prize in the university’s orchestra concerto competition, playing Rachmaninoff’s Piano Concerto No

. 1 with the VCU Orchestra. After completing his studies at VCU, he realized that he was even more talented at improvisation, and after moving to Boston, Massachusetts he began studies at The New England Conservatory of Music’s Graduate Contemporary Improvisation program in Boston, MA. At the New England Conservatory of Music, Evan studied with some of the jazz piano greats such as Paul Bley, Ran Blake, Charlie Banacos, Fred Hersch, and disciples of Jaki Byard. During this time Evan studied the great American masters such as Charles Ives and Keith Jarrett, and practiced his art in jazz trios at clubs and art galleries throughout Boston. Soon after Evan was asked to perform at various clubs and concert halls in the New England area such as The Zeitgeist Gallery, Jordan Hall in Boston, and The Knitting Factory, NYC. He has also created and performed in a multimedia performance for Mobius Artist Studios, Boston. As well as performing and studying around Boston, Evan worked as a music director for several college productions, including the University of Massachusetts 2000 production of Steven Schwartz’s Working. After graduating in the summer of 2001 from The New England Conservatory of Music, Evan was hired as a music teacher for the Dublin Private Preparatory School in Dublin, NH. During this time Evan continued to develop his improvising and composition concept with a French improvising violist, Frederic Viger.

From 2004 to the present, Evan has been a constant performer in the orchestras on board some of the worlds finest cruise lines, including the Queen Mary 2, the world’s largest cruise ship and one of the last of it’s kind to showcase a dance orchestra that plays big band music of the 20’s to the 50’s. Evan as also worked for many years as an entertainment musician for Carnival Cruise Lines, Royal Caribbean Cruiselines, Celebrity Cruises and Princess Cruise Lines. Working for the cruise industry has taken him to many Caribbean, South America, Mediterranean and European vistas. During 2015 Evan premiered his Piano Entertainer Headliner show on Azamara Club Cruises to international audiences, which included music from John Williams, Liberace, Ernesto Lecuona, Andrew Lloyd Webber and more.

Evan has also been involved in several musical theatre productions as music director, from regional theater companies in New England to the cruise entertainment industry, including The Three Penny Opera, The Fantasticks, Sunday In The Park With George, Tell Me On A Sunday, Young Frankenstein, Working, Hands On A Hardbody, Bye Bye Birdie, Avenue Q, and Purlie.

From 2016-2019, Evan worked at the School of Theatre and Dance at East Carolina University as a ballet and modern dance accompanist, providing piano accompaniment for ballet, modern and contemporary dance classes. His repertoire for ballet classes ranges from composers such as Tchaikovsky, Rachmaninoff, Chopin, Beethoven, Bach, Mozart, Liszt, Minkus, Bizet and Ravel, as well as Prokofiev, Stravinsky, and Debussy. Evan is extremely talented at improvising baroque, classical, romantic and contemporary styles of piano accompaniment, and this technique, along with his trained ear, enables a melodic, intuitive sensitivity to dance movement. Concerning modern and contemporary dance accompaniment, he is heavy into Frank Zappa, and other 20th century composers such as William Schumann and David Diamond. At ECU's School of Theatre and Dance, Evan found ways to incorporate these composers and others into his modern and contemporary dance classes. He believes that formal modern American classical chamber scores are difficult to re-transpose into a new choreography: one still needs the original symbiosis, or they don't work. In his opinion, this repertoire, should be re-synthesized, as today's music has gotten much more “techno”, and beat-oriented. These composers were primarily pianists, and really great ones, and they used their experiences as NYC dance accompanists (almost all of them had some sort of affiliation in the dance world, either as dance accompanists or commissioned composers) and their experiences improvising music, into their compositions with choreographers, and re-invented the collaborative process between composers and dancers. Evan wishes to continue this great tradition, and he envisages a way of combining the old with the new: generating loops of acoustic piano and prepared piano pieces into Abbleton software, and then re-imitating the original Reichian concept of minimalism with contemporary improvisation on top, by using a Roland keyboard with the loop-based software in a live setting. His concept is thus: instead of just using the piano in a classroom setting, use a keyboard AND the piano AND the loop-based software with original acoustic piano loops, and voila, you have a new synthesis of old and new.

Solo improvisation is really at the heart of Evan’s soul: his solo piano performances are always engaging in their creative, emotive, and modern structure. He has recorded several albums in the past 10 years that are devoted strictly to improvising on pre-composed themes that are constantly imagined and re-imagined into grand, autocratic sound sketches that use a language of ideas common to most ears. His latest album, The Art of Contemporary Improvisation, explores the art of instantaneous composition - music that is basically coherent in it's form, language and syntax, but is improvised completely in one or two takes. Here's an excerpt from his liner notes of the album:

This album was completely improvised: there was no written music used before or during the process. Every track was conceived “in the moment”, with the intention of being entirely through-composed. The majority of the album was recorded in one or two takes, with some of the improvisations requiring up to five different takes and a bit of digital editing. I like to think of contemporary improvisation as a process, more than a practice or a sound. It is in the process that the complexity of sound is born. The techniques that are required in the process are based on years of psychological musical practice, aural memory, and long-term melodic and harmonic adaptation, as well as the learned physical technique of playing a grand piano or a digital keyboard. The styles that I have incorporated into this process range from Impressionism, Romanticism, Primitivism, Traditional Jazz, Modern Jazz, Latin Jazz, Neo-Classicism, Avant-Garde and New-Age.

These ideas, these unions of mind, soul and ear, are spontaneous as well as hierarchical, in that the transformations and adaptations of many different styles of music from my past are ordered into a constantly evolving organic system, like signals being transmitted and relayed to each other over a vast landscape. It is the unfolding of this hierarchy from a higher dimension into our immediate perspective that generates the sound that is my sound. I believe that music should always be curious, constantly pushing the boundaries of thought, expanding into a quest for limitless wonder and amazement. The process of improvisation enables musical ideas to be explored exponentially, continuously building upon previous explorations.

There are several composers, jazz pianists and teachers that have influenced my sound over time, and these include Franz Liszt, Maurice Ravel, Igor Stravinsky, Keith Jarrett, Brad Mehldau, Frank Zappa, Ran Blake, and Cecil Taylor. The absorption, imitation and reflection of artistic content from others is imperative for the development of an individual’s own craft. However, there is still the need for innovation and experimentation, to continue to advance an art form, to allow for contemporary expansion. As a composer, performer and improviser, I believe I am offering a personal and revolutionary evolution of the process, the art of making music spontaneously, the art of contemporary improvisation. The ultimate gift would be that the listener, on his or her journey through my brief encapsulation of sonic frequency in time, finds this music to be invigorating, sentimental, optimistic and enlightening. Show less

All About Jazz musician pages are maintained by musicians, publicists and trusted members like you. Interested? Tell us why you would like to improve the Evan Blair Whitfield musician page.