As the 90's progressed and smooth jazz artists began incorporating more hip-hop and classic R&B grooves into the music which came to define the genre, Everette Harp found himself ahead of the curve. Raised in church and weaned on gospel and soul music, the Houston born saxman on his first two Blue Note recordings, Everette Harp (1992) and Common Ground (1994), was already leaning this way, combining dynamic funk edges and urban textures into the mix. His popular 1997 tribute to Marvin Gaye's 1971 watershed album What's Going On combined the best of his two worlds, modern day contemporary jazz and the classic soul he grew up with. 1998's Better Days further solidified his place among the chart-toppers of smooth jazz. While on his previous albums, Harp sought to push the envelope stylistically and show off all of his abilities as writer, arranger, producer and player (even of straight ahead jazz), For the Love strips away the diversions and focuses purely on Harp's ability to convey powerful emotions via lyrical playing, beautiful melodies and sensuous rhythms.

While high ambition has always been Harp's trademark as an artist and performer, on For the Love, the saxman looked forward to the challenge of letting go of pretension, focusing on the love of song and above all, keeping things simple. “I've always looked upon each album as a learning experience, and for me that used to mean trying to fill each song with huge arrangements and every sonic idea that came to mind, scattering styles on the other songs once the radio tunes were recorded, and playing a lot of notes. But like George Duke has long told me, there is an art form to being simple and communicating honestly. The result, I believe is my most focused project to date.”

Keeping with that sensibility, the album title For the Love is not simply a reflection of the very romantic vibe found in many of the collection's titles. Rather, it refers to his overall intention to play from the heart for the love of the music. “The title encompasses the whole feeling of the project and the personal place I'm in right now. There's less riffing, less eclecticism and more real feeling. I stepped back a bit and took a more laid back approach. That was a bit of a struggle at first, but I absolutely love the results.”

To help him find that crucial balance, Harp brought in veteran producer Steve Dubin (George Benson, Al Jarreau, Richard Elliot) to co-write (with Harp) and produce six of the tracks — the bubbly retro-funk opener So Automatic, the soulful hip-hop flavored romance I Just Can't Let Go, the edgy, throbbing alto showcase Right Back Atcha (featuring Ricky Peterson's lively electric piano), the bluesy and atmospheric Love Conditionally, the snappy and percussive jam Dancin' With You (with Doc Powell's crisp electric guitar harmonies and solo) and Put It Where You Want It, a rollicking, brassy and blues-drenched cover of a Crusaders classic conceived as a duet between Harp and electric guitarist Jeff Cobb. “Steve knew my reputation as a guy who loved big and beautiful productions, and I knew he would bring a centered approach and a sensibility to the tunes which radio would respond to,” says Harp. “His objective point of view added so much to the recording process.”

Harp produced the moody, eloquent soprano piece I Miss Me With You, which he co-wrote with popular smooth jazz keyboardist Brian Culbertson; and a lush, dreamy soprano-driven cover of the Stevie Wonder chestnut, Where Were You When I Needed You. For the Love also features two magnificent vocal tracks — the R&B/pop flavored I Can't Take it Anymore, featuring the up and coming group 20/20 and produced by Buster and Shivani, and We Don't Have To Say Goodbye, on which Harp shows his own strong vocal abilities; the track was co-produced by co-writer Shaun LaBelle.

EveretteAs with his previous recordings, For the Love features some of smooth jazz and R&B's most dynamic and acclaimed musicians. Aside from those previously mentioned, Harp is joined by keyboardist George Duke (on I Can't Take It Anymore and Where Were You When I Needed You), guitarists Ray Fuller, Tony Maiden and Paul Jackson, Jr.; bassists Larry Kimpel and Alex Al; drummer Li'l John Roberts and percussionist Lenny Castro.

Most musicians can reach back and find a turning point moment when they realized exactly what their lives would be about. But as with his lifelong, ever powerful faith in God, Everette Harp only remembers that he always played music. He started playing piano at two, sax at four and says, “It was just like breathing for me.” Born and raised in Houston the youngest of eight children, Harp's most profound early influences were the gospel music he heard at the church where his dad was the minister and the great jazz performers he began listening to in high school — Grover Washington, Jr., Hank Crawford and Stanley Turrentine. After graduating from North Texas State as a music major, he worked for a brief time as an accountant before playing in a handful of local bands and picking up studio jingle work.

Harp moved to Los Angeles in 1988, and his career as a sideman took off; after a brief tour with Teena Marie, he traveled internationally with Anita Baker (an association that went on and off until 1995), performed with Sheena Easton and Kenny Loggins and began developing his studio chops behind such artists as Patti LaBelle. Harp signed a solo deal with Manhattan/Blue Note in 1992 and recorded his self-titled debut between tours with George Duke and Marcus Miller.

That album's popularity led to further developments which established Harp as one of smooth jazz's greatest ambassadors — a date at the Montreaux Jazz Festival; a tour with labelmate Rachelle Ferrell; playing alongside President Clinton, performing Your Mama Don't Dance at the 1993 Inaugural ball (Clinton borrowed one of Harp's saxes for the occasion!); and appearing weekly with The Posse on The Arsenio Hall Show. In the later Nineties, his sax was heard performing the theme song for Entertainment Tonight, as well as the Soul Train theme (Produced by George Duke), which is still being heard over the main titles. He also played the main title theme to Roger Ebert at the Movies. Over the years, Harp has also performed and/or recorded with a wide variety of pop, R&B and jazz superstars — Luther Vandross, Dionne Warwick, Jeffrey Osborne, Aretha Franklin, Gladys Knight, Billy Joel, Neil Diamond, Al Jarreau, After 7, Phil Perry, Go West, Natalie Cole, Chante Moore, Will Downing, John Tesh, Branford Marsalis, Herbie Hancock, Tony Williams, Wayne Shorter, Chaka Khan, Stanley Clarke, Michael McDonald and Larry Carlton among others.

Bill Clinton with EvWhile Harp has cut back on his side gigs over the past few years to focus more on his solo career and other musical endeavors, the one superstar association he has continued is with Kenny Loggins. Over the past two years, Harp has opened for Loggins' concerts with his own band, then joined the singer/songwriter as keyboardist, saxophonist and backing vocalist. “I love playing for other artists because I can show up, have a good time and not have to worry about anything beyond doing a great performance,” Harp says. “I've learned so much from working with different artists. Anita Baker taught me all about stage presence and audience rapport, while studying Kenny's amazing musicianship has helped build my own musicality. Also, production Zen-master George Duke taught me musical maturity and an amazing amount about how to produce great records.”

Two of Harp's brothers followed in their father's footsteps by becoming Baptist ministers, and the saxman feels that playing music is his way of bringing the love of God to his own audience. “I see my music and career as a gift from God, as though I am simply a conduit with a force working through me to entertain people and make them happy,” he says. “My spiritual side helps me get in touch with my emotional side, and together, they create the feeling that comes from my horns. Before every performance, my band and I pray that God help us fill our audience with the love of music He has given us. My focus is always on God and influencing my listeners in a positive way.” Show less 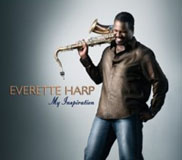 All About Jazz musician pages are maintained by musicians, publicists and trusted members like you. Interested? Tell us why you would like to improve the Everette Harp musician page.