Eve Seltzer's debut CD, Live at ShapeShifter Lab, showcases her interpretive abilities in communicating the story the within the song, and making standards fresh for audiences of all ages. Her singing is distinctive, blending polish and earthiness, and joyfully embracing the American jazz tradition.

Eve started singing professionally at the age of eight, in the children's choruses of the St. Louis Symphony and the Opera Theatre of St. Louis. From age eight to age 20, she listened to jazz and blues recreationally, and sang classically. Eve majored in classical voice in the joint program between the New England Conservatory of Music and Tufts University, before moving to New York.

In New York, Eve continued studying music, and for many years could be spotted on the coffee house circuit singing original songs with her acoustic guitar. In 2002, Eve started taking jazz voice lessons at the New School with Julia Dollison, and realized that she had found her musical niche. Other teachers include Miles Griffith, Marion Cowings, and Barry Harris.

Since moving back to her hometown in 2014, Eve has become a fixture on the St. Louis jazz scene. In addition to leading her own combo, Terminal Swing, Seltzer fronts the Gypsy jazz combo Franglais, where she brings her St. Louis sensibility to French jazz.

Seltzer’s voice is rich enough to re-animate...standards in show-stopping renditions

-Heather Jacks, Author, The Noise Beneath the Apple 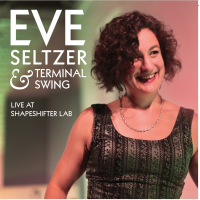 Days of Wine and Roses

All About Jazz musician pages are maintained by musicians, publicists and trusted members like you. Interested? Tell us why you would like to improve the Eve Seltzer musician page.