The band Farmers Market was formed in Trondheim during the fall of 1991. All members where students of the Jazz Department at the Conservatory of Trondheim. At first Farmers Market started out as a free-jazz quintet, but soon found itself heading in a completely different direction; towards Bulgarian folk-music. Since then, this Bulgarian music, with its odd meters, oriental scales and improvisational possibilities, has become one of the main musical ingredients of Farmers Market.

The music of Farmers Market is a mixture of Bulgarian folk music, jazz standards, popular music and humor. Farmers Market has become one of Norway’s most popular live bands, playing at all kinds of venues and festivals: jazz, folk and rock. Farmers Market released their first CD, Speed/Balkan/Boogie, in February 1995. This was a live recording from Molde International Jazzfestival 1994. The CD features four guests from Bulgaria; two singers from the women’s choir “Lés mystére dés Voix Bulgares” (now known as “Angelite”), and two folkmusicians.

Farmers Markets first saxophonist, Håvard Lund, left the band during fall of 1995 and the band had to look to Bulgaria to get a replacement. Through friends they got in touch with Trifon Trifonov. After an audition over the telephone(..!) he joined the band December 1995.

In 1997 – Farmers Market released its second album with saxophonist Trifon Trifonov from Bulgaria. This was an extreme album with elements of many different styles and ideas from bluegrass in odd meters, to Metallica-like versions of traditional balkan tunes, and slick commercial music mixed with Stockhausen! The album got very good reviews from many contemporary music magazines as well as rock, folk and jazz magazines in Europe. A few years later this album made a certain Mr. Mike Patton loose his breakfast and initiate a spamfest towards the band members, the result of which saw the light spring of 2008 – Surfin´USSR.

Farmers Market went into hibernation for a year around 99-98 (or was it the other way around). Upon returning to the bopping R(umenian) & B(ulgarian) scene in 2000 Farmers Market had a new record which they released on the German label Winter and Winter. The title of the album is a secret and we’ll never tell you. For a label with an ethnic predisposition of being irritating – dare we say almost militant – in their effectivenessisity they managed to not only baffle everyone including the band. What is the friggin' title on the album..!? Nuff said.

Around the summer of 2004 Farmers Market began the sloooow process of thinking about maybe making a new record. After spending all funds on two mind-blowing drum tracks from Jarle Vespestad, some time went by until funds were restored and further work could resume. Recording in hotel rooms, Stian Carstensen's basement, Trifon's kitchen, living room and toilet, Finn Guttormsen's loft, Nils-Olav Johansen's backyard, Dag Yri Studio and a ski lodge in Eidsvoll the result was rushed to print December 2007 and eventually released, to Everyone's surprise, in the fall of 2008. So surprising, in fact, that no records where available in Norway until 14 days after the release of the CD and the tour that supported it. Anyway – we´ll get it right next time! Show less

Slav To The Rhythm 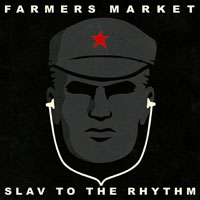 Slav to the Rhythm

All About Jazz musician pages are maintained by musicians, publicists and trusted members like you. Interested? Tell us why you would like to improve the Farmers Market musician page.