Jazz music's first organist and one of the giants of piano jazz Thomas Wright “Fats” Waller was born on May 21, 1904 in Harlem into a musical family. His grandfather was an accomplished violinist and his mother was the church organist. His family had moved to New York City from Virginia in the late 1880s and his father was the pastor of the Abyssinian Baptist Church in Harlem. His first exposure of music was in the form of church hymns and organ music, an instrument that he was taught to play by his mother and the church musical director. The latter introduced him to the works of J.S. Bach which he played on and off for the rest of his life. When he was about 6 or 7, because he had expressed interest in playing the neighbor's piano, his mother hired a piano tutor for him. He learned how to read and write music from his piano teacher but he preferred to play “by ear.”

At age 14 he won a talent contest playing Carolina Shout by James P. Johnson, a song he had learned by watching a pianola play it. That year he left school and worked at odd jobs for a year. In 1919 he got his first regular job when he was hired by a movie theatre to play organ accompaniment to the silent films they showed.

His father wanted him to follow in his footsteps and go into a career in religion but he wanted to pursue his passion for music so in 1920, after his mother died, because of the disagreements he had with his father over this issue he moved out of his family's house and in with the family of pianist Russell Brooks where he met James P

. Johnson and Willie “The Lion” Smith two of the giants of the Harlem stride. James P. Johnson took the young Waller under his wing and taught him the stride piano style and advanced his musical education in general. Smith also influenced the young man by introducing him to the works of the impressionistic composers of the 19th century.

In 1921 he was hired to play musical accompaniment on the organ at another silent movie theatre at a weekly salary of $50. A year later he made his recording debut for the Okeh label with a 78 of two of his own compositions. In 1923 he recorded a number of piano rolls for the QRS company in addition to additional sides both as a leader and as an accompanist to blues singers. For the next 4 years he recorded many sides for RCA Victor and became very popular.

According to one anecdote, one night in 1926 after finishing a performance, he was kidnapped by gangsters and forced to play at Al Capone's birthday party. In 1927 he recorded with the Fletcher Henderson Orchestra and in 1928 he had his Carnegie Hall debut. He met the poet and lyricist Andy Razaf in 1927 and the two collaborated on musicals the most of popular of which “Hot Chocolates,” with the song “Ain't Misbehaving,” opened in 1929 off Broadway but shortly afterwards was transferred to Broadway. This brought him both critical and commercial success.

Waller was married twice, from his first unsuccessful one he had a son Thomas Jr and from his second two sons: Maurice and Ronald.

In 1931 he toured Paris and upon his return to New York he formed his small combo “Fats Waller and His Rhythm” with whom he would perform and record until his death. He recorded for RCA hundreds of sides and also performed on radio broadcasts and starred in movies. In the mid 30s he regularly performed on the West Coast and in 1938 returned to Europe this time for a tour of the British Isles. The outbreak of war forced him to return to the US in 1939. He performed one more time at the Carnegie Hall and for the remainder of his life he toured the US especially the west coast.

In 1943 he starred in the film Stormy Weather and in December of that year while playing the Zanzibar Room in Hollywood he suffered a bout of influenza. He had to cut his engagement short in order to return home. Years of excessive drinking, overwork and his obesity took a toll on his health and the severe influenza led to complications. On December 15 1943, on the train back to New York, Thomas “Fats” Waller passed away near Kansas City from pneumonia.

In 1993 Waller was posthumously recognized by the Grammy Lifetime Achievement Award. Show less

New Jazz Film "They Died Before 40" Seeks Help With Photographs

The Fats Waller Bluebird Sessions This Week On Riverwalk Jazz

The Fats Waller Bluebird Sessions This Week On Riverwalk Jazz

Fats Waller on the... 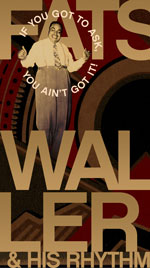 All About Jazz musician pages are maintained by musicians, publicists and trusted members like you. Interested? Tell us why you would like to improve the Fats Waller musician page.