If you happen to visit Tunisia and talk about jazz, then the name of Fawzi Chekili would come instantly in mind, Fawzi Chekili has been leading several jazz projects over the last thirty five years in his home country and abroad, not only performing as a fine guitarist and composer but also creating several events featuring world renowned jazz artists.

Over the past thirty five years, Fawzi Chekili has earned a reputation as one of Tunisia's international musicians. Born in 1950 in Kelibia (Tunisia), the guitarist grew up listening to local folk music before opening to the music of the world and jazz. After studying english literature in high school, Fawzi became a professional musician playing through several countries including US, Russia,Canada and more.

Fawzi Chekili returned to Tunisia to become a highly sought- after side musician, arranger and composer, by the most revered artists in his home country. He has played and recorded with Lotfi Bouchenaq, Sonia M'barek, Dhafer Youssef and Hedi Jouini... He also performed with renowned international stars: Deborah Brown, Glenn Ferris, Steve Houben, Jimmy Gourley, Dario Deidda, Didier Lockwood, Russell Malone and many others.

He released his first album independently in Europ in 1993 titled “Taqasim-Tunisian Jazz” and followed up with a world tour leading him to present his work throughout several countries. Basically a blues and a jazz performer, Fawzi has been experimenting with the native tunisian folk music writing for instruments such as the ney (a flute made from bamboo) the oriental accordeon, the oud and the ûdge a fretted and unfretted twelve string instrument created by himself.

Fawzi is also a fine composer and piano player. 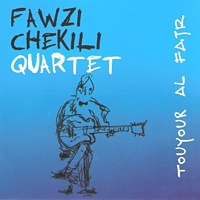 All About Jazz musician pages are maintained by musicians, publicists and trusted members like you. Interested? Tell us why you would like to improve the Fawzi Chekili musician page.