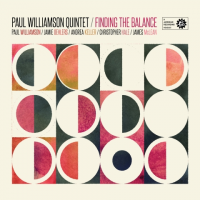 Finding the Balance; Hook; You Can't Wear a Cape Every Day; It's Hip to be Humble; By a Thread; Yes, I'll be Your Pin Cushion; When the Stars Align.

All About Jazz musician pages are maintained by musicians, publicists and trusted members like you. Interested? Tell us why you would like to improve the Finding the Balance musician page.