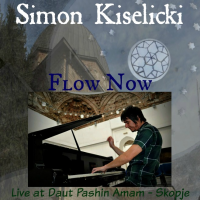 Flow Now is a live solo performance having taken place in Macedonia's historical monument Daut Pashin Amam. It was the first official jazz solo performance to have taken place in Daut Pashin Amam, which usually only hosts classical performances. In the hour and a half long performance, Kiselicki presents a majorly improvised repertoire, exploring his compositions and jazz standards from the perspective of the present; raw, honest, fluid, and sensitive to the essence of the 'now'. Unaware of what the concert will reveal, Simon enters unprepared, intentionally not having 'practiced' a week beforehand- only having 'played'.

All About Jazz musician pages are maintained by musicians, publicists and trusted members like you. Interested? Tell us why you would like to improve the Flow Now (Live At Daut Pashin Amam) musician page.