Francesco Diodati is a modern guitar player whose inspiration is steeped in traditional jazz, contemporary, rock and folk music. He has developed his personal language by combining a spontaneous melodic approach with a clever use of electronics and effects.

Francesco is Neko’s band leader, including Francesco Bigoni and Carlo Conti, Francesco Ponticelli, Ermanno Baron, that has debuted in 2008 and since then is touring worldwide. In 2010 the group releases a first album, Purple Bra, published by Auand Records, amongst the most important European labels for contemporary jazz., followed by Need Something Strong. Both the albums have received an enthusiastic response by critics.

Since 2014 Francesco is part of the New Quartet of Enrico Rava and they also play in duo.

Since 2010 he is part of the ambitious project “MyanmarMeetsEurope”, which tours extensively in Asia and Europe.

Recently Francesco has been voted as best Guitar Player of 2013, 2014 and 2015 by the Italian Jazz Magazine JazzIT.

Born in 1983 and raised in Rome (Italy), Francesco was twelve years old when he started playing guitar, quickly demonstrating a precocious talent and a natural disposition to creativity and improvisation. He attended the In.Ja.M. master by Siena Jazz between 2008 and 2010, with lessons by Kurt Rosenwinkel, John Abercrombie, Hein Van De Geyn, Jeff Ballard, Drew Gress, Seamus Blake, Roberto Cecchetto and many others. He was also selected among the master best students to partecipate to the Panama Jazz Festival in 2010 and to play in a series of concerts in the USA, in an exchange program between Berklee Global Jazz Institute of Boston and Conservatoire National Supérieur de Paris. In 2009 he receives one of the highest scholarship ever to be given to a guitarist to attend prestigious New School for Jazz and Contemporary Music in New York, where he meets Reggie Workman, Ben Allison, Peter Bernstein, Rachel Z, Rory Stuart and many others. 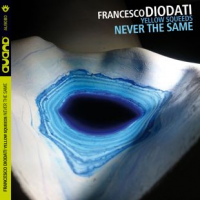 All About Jazz musician pages are maintained by musicians, publicists and trusted members like you. Interested? Tell us why you would like to improve the Francesco Diodati musician page.