Fredrik Carlquist is a Swedish saxophonist based in Barcelona in Spain. Since his arrival to the Catalan capitol in 2001Fredrik has established himself as one of the strongest sax voices on the city’s jazz scene. With the well balanced and melodic playing heard on Fredrik’s albums from recent years he’s often been compared to players like Stan Getz and Paul Desmond but his musical palette is much broader than that. Even though a kind of cool and airy lyricism has followed him over the years Fredrik definitely knows how to be both hot and loud or free or abstract depending on the moment and the musical situation. He has proved to be something of a cross-over player and he’s explored different stylistic directions spanning from the early jazz from the twenties and thirties thru be-bop to free- and different blends of fusion- jazz.

Born in Jönköping in Sweden in 1969 Fredrik started to play the clarinet at nine years age and saxophone at ten.

He studied music at Skurups Jazzlinje (1989-91) and Malmö Collage Of Music (1992-96) where he received a Bachelor Of Fine Arts In Music. In 1997 Fredrik won the “Jazz In Sweden” award together with Jacob Karlzon Trio and fellow saxophonist Henrik Frisk and together they released the album “Blue Pages”. Fredrik’s debut CD “It’s About Time It’s About Love” was recorded the year after and received rave reviews when released in 1999. His first two album contain mainly original compositions where Fredrik proves himself as an inventive and often melodic writer. For several years Fredrik also taught saxofon at Skurups Jazzlinje one of the oldest most well established institutions for jazz education in Sweden and he has worked as arranger and saxophonist at Swedish National Public Service TV (SVT).

Fredrik’s releases in recent years focus on the standard repertoire in a relaxed chamber-jazz format gaining appreciation for it’s melodic and relaxing qualities and for expressing influences that is not often heard on records of today. Having taken the the step full out as a self produced musician his skills as a recording- and mixing engineer has become a part of his profession. For instance he recorded and produced 8 tracks on singer/songwriter Richard Lindgren’s critical acclaimed CD-box Memento (Rootsy Records) from 2011.

Fredrik has performed all over Europe, USA, Mexico, Colombia, China, DR Congo and has worked with groups and artists such as: 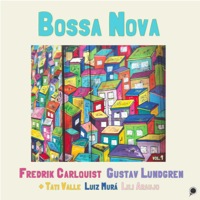 All About Jazz musician pages are maintained by musicians, publicists and trusted members like you. Interested? Tell us why you would like to improve the Fredrik Carlquist musician page.