The inevitable result of a talent-soaked soul and jazz community, The Funky Knuckles are taking the sound of Dallas to an entirely different level. They have been together six years and have held a weekly residency since the beginning. The band is comprised of sidemen from some of the most respected acts in the music industry (Beyonce, Erykah Badu, Marcus Miller, Stanley Clarke, Talib Kweli, P. Diddy, Chris Dave, The Polyphonic Spree, etc.), yet possesses a sound distinctly separate from any of their individual projects.

The Funky Knuckles move together musically as a school of fish, never complacent and always stretching the boundaries of improvisation and composition. Whether performing original music or standards, they draw from each member’s musical experiences to create their unique genre-bending sound. After the release of their debut album on GroundUP Music, As of Lately, The Knuckles added a full-time horn section and began touring nationally.

Meta-Musica (also on GroundUP), climbed the iTunes Jazz Charts to become the #1 selling record in the United States the day it was released. 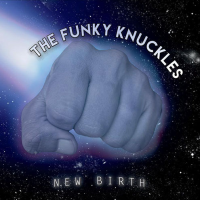 All About Jazz musician pages are maintained by musicians, publicists and trusted members like you. Interested? Tell us why you would like to improve the Funky Knuckles musician page.