”Gabby Pahinui,” says DeSoto Brown, a Hawaiian cultural-history expert whose brother worked with Pahinui, “was not only that he was an outstanding musician and entertainer, and a central figure, maybe THE central figure, of the Hawaiian Renaissance in the '70s, but that he was an inspiration to others. Thousands of Hawaiian kids learned that they were worthy as a people because of Gabby's example.”

Born Charles Kapono Kahahawaii Jr., and hanai'd into the Pahinui family, Pahinui was 59 when he died on a golf course in 1980. He worked for the City and County road and refuse crews most of his life. His real passion, though, was music, and Pahinui was one of the great natural musicians of Hawaii, the sort of pure channel that drew international stars like Ry Cooder to learn at his knee.

Pahinui taught himself bass fiddle at age 10. Although he claimed to not understand written music, the charts he prepared for recordings were widely praised for their inventive, jazzy phrasing. Pahinui's rich baritone trembled with bottomless emotion when he sang, and he could slide into a feathery falsetto that cut deeply into people's soul.

Gabby landed a gig as a back-up guitarist for Charley 'Tiny' Brown. He quickly mastered the steel guitar without ever learning to read music. Because most musicians of the time only played in bars, Gabby also formed a drinking habit that stuck with him throughout his life.

Gabby later became known for his mastery of the slack-key guitar. He claims to have learned it from a mystery man named “Herman.” It is not known who Herman was, but Gabby claimed that he was also from the Kaka'ako area and was the greatest slack-key player of all time. After the success of slack-key guitarist Ray Kane, some believed that his father, Herman Kāne, was the Herman to whom Gabby was referring. known as the guardian of kiho'alu, or slack-key music, the purely Hawaiian method of finger-hammering drone-tuned strings and simultaneously playing a melody with other fingers. While the method of playing would have survived without him, it's doubtful that it would have become the dominant musical form of Hawaii today.

In 1946, Gabby made his first recording, “Hi`ilawe,” for the Bell Records label. This may be the first record of a Hawaiian song with slack-key guitar. The following year came “Hula Medley,” the first record of a slack-key guitar instrumental. During this period he made two other influential sides for Bell, the vocal “Wai O Ke Aniani” and the instrumental “Key Koalu” (a misspelling of “Kī Hō`alu,” the Hawaiian term for “slack key”), plus another version of “Hi`ilawe” for Aloha Records.

Gabby played with many of the great bands and musicians of his time, including Andy Cummings, Lena Machado, and Ray Kinney. He also appeared on Hawaii Calls, a popular international radio show that began in the 1930s. Eventually, Gabby moved Emily and the children to Waimanalo, which had become a popular second home location for many musicians. The all-weekend jam sessions at the Pahinui home were legendary.

Called “Pops” by his friends, Pahinui was a sly, cheerful fellow who had the knack of eliciting instant empathy. His long battle with alcohol made him seem more like a regular fellow, although he was anything but.

Gabby Pahinui may have been this century's most naturally talented instrumentalist, the sort of working-class hero who turns life into art, and vice versa.

After the breakup of the Whiskeyhill Singers in 1961 Dave Guard (of the Kingston Trio) had returned to Hawaii. Always a folk music eclectic, Guard attempted to publicize the slack-key sounds of Hawaiian folk guitar. Guard worked closely in Honolulu with slack key guitar icon Gabby Pahinui to record and produce Pure Gabby, an album of classic Hawaiian melodies played with slack key tunings. Guard tried to interest major record companies with Pure Gabby, but met with little interest, and Guard shelved the project. In 1978, ten years after his return from Australia, at the urging of Singer colleague Cyrus Faryar who had heard Guard's Pure Gabby tapes, Guard contacted Hula Records of Honolulu about Pure Gabby, who quickly agreed to take the recordings and distribute the album. Show less 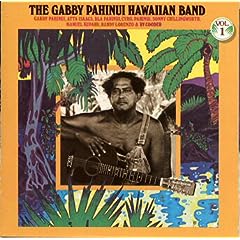 All About Jazz musician pages are maintained by musicians, publicists and trusted members like you. Interested? Tell us why you would like to improve the Gabby Pahinui musician page.