Award-winning vocalist Gabrielle Stravelli has garnered critical acclaim and a loyal following through her original songs and her unique take on material from the New American songbook as well as classic standards by artists as varied as Pink Floyd and Duke Ellington, Dolly Parton and Johnny Mercer. A trained actor, Gabrielle has a soulful sensitivity for the story in the lyric and was called “a powerhouse of individual expression” by David Finkle of The Village Voice.

In January 2017, Gabrielle released her third album, “Dream Ago” comprised primarily of original material co-written with bassist Pat O'Leary. The album received a five-star review from DownBeat Magazine and garnered raves from the Huffington Post, Scott Yanow of LA Jazz Scene and Tony Frankel of LA's Stage and Cinema among others. In March Gabrielle and her trio toured the album for ten days traveling from Philadelphia across the Midwest.

She immediately followed the tour with a week in Los Angeles as a master teacher for YoungArts, a national organization that organizes week-long intensives for artists 14-18 years old and connects them with professionals currently working in their chosen field. In April Gabrielle was invited by the US Embassy in Azerbaijan to perform at a gala celebrating 25 years of diplomatic relations between the US and Azerbaijan. Gabrielle's group collaborated with Sevda Alekperzade, Azerbaijan's most prominent jazz vocalist on an arrangement symbolizing the collaboration between the two countries, which was performed at the gala for 400 dignitaries and heads of state.

Stravelli's group headlined the 2016 Eleuthera All That Jazz Festival in Eleuthera, Bahamas and headlined an international tour sponsored by the US State Department's American Music Abroad program for 2015/2016. Out of hundreds of applicants, the Gabrielle Stravelli Ensemble was one of just 10 bands sent around the world to foster cultural diplomacy through music. The tour took her to Moldova, Azerbaijan, Slovenia and Malta, where her quartet taught workshops and masterclasses during the day and performed concerts at night. In the fall of 2015 she premiered a new song cycle, Rooms of Light, written by world-renowned jazz pianist, Fred Hersch with lyrics by award-winning poet Mary Jo Salter. That project was proceeded by a run of solo shows at Feinstein's/54 Below which won her a second rave review from the New York Times.

In July of 2014 Gabrielle performed a 5-night sold out run of solo shows at New York's Metropolitan Room which won unanimous raves from the New York Times, the Wall Street Journal and Huffington Post among other publications. Prior to that she toured the United States with Wynton Marsalis and the Jazz at Lincoln Center Orchestra and Chorale Le Chateau premiering Marsalis' complete version of his masterwork Abyssinian: A Gospel Celebration. She joined the Chorale again in 2016 to perform the piece at the renowned Chautauqua Institute's summer festival.

At age 15, Gabrielle began singing as a soloist with orchestras and has since performed on stages from Amsterdam to New York including the Caramoor Festival, Jazz at Chautauqua, Lincoln Center's Midsummer Night's Swing, Birdland Jazz Club, Kitano Jazz, 55 Bar, 92Y's Lyrics and Lyricists Series, Cornelia Street Cafe, 54 Below, Carnegie Hall, Merkin Hall at Kaufman Center, the Hammerstein Ballroom, the Iridium Jazz Club, BB King Blues Club, Somethin' Jazz, The Garage, Grasso's, Fulton Theatre, Maree Sonore Festival in Venice, Italy and the New Jersey Performing Arts Center (NJPAC) where she opened for Esperanza Spalding and Cassandra Wilson. For three and a half years she headlined a Jazz Brunch every Sunday at Le Pescadeux restaurant in Soho, NYC. She has appeared as a soloist with the Santa Rosa Symphony, the Nelson Riddle Orchestra, the New Jersey Festival Orchestra and the Cincinnati Pops, sang the role of Anita in West Side Story with the Kentucky Symphony Orchestra and performed the role of Jeannie in the European tour of HAIR. She sings with a “forceful emotional presence and a versatile, well-shaded voice,” says Adam Feldman of Time Out New York, and Peter Haas of Cabaret Scenes, describes her voice as “clear and clean, expressive, supple, with unforced power.”

Gabrielle was one of only ten finalists selected internationally for the 2011 SHURE- Montreux Jazz Festival Vocal Competition and was the 1st runner-up at the 2009 Jazzmobile Vocal Competition in Harlem. In 2008 she was awarded the Backstage/Bistro Award for Performer on the Rise (given by critics from Variety, The Village Voice and Backstage) and that same year was named to a list of the top ten cabaret acts by John Hoglund of theaterscene.net. “One of today's most promising vocalists...Whether crooning sultry standards like “Skylark or “My Foolish Heart” or playing with Pink Floyd, she embraces each line with perfect, supple phrasing and effective breath control that rivals all that the competition longs for. With luck, she will be picked up by a jazz label and given the world stage her talents deserve.”

Gabrielle holds a BFA from the University of Cincinnati College-Conservatory of Music and has studied with acclaimed jazz vocalists Nancy Marano and Marion Cowings and pianist David Berkman. Show less 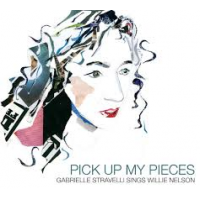 All About Jazz musician pages are maintained by musicians, publicists and trusted members like you. Interested? Tell us why you would like to improve the Gabrielle Stravelli musician page.