Acclaimed by Downbeat Magazine as “a thoughtful improviser with a quiet tone who makes every note count,” Manhattan-based guitarist, composer, improviser, and painter Gabriel Vicéns is one of the most in-demand guitarists on the New York City jazz scene. Originally from Guaynabo, Puerto Rico, Vicéns made a move to NYC after a four-year Professorship at the Interamerican University of Puerto Rico. He has been mentored by an impressive list of performers and composers, including Ray Anderson, Carlos Cabrer, Miguel Zenón, David Sánchez, Daria Semegen, Paul Bollenback, Antonio Hart, Fernando Mattina, Lois V Vierk, and Luis Perdomo. Legendary bassist Eddie Gómez says Vicéns is “a creative musician that displays a new vision on the guitar.” Vicéns playing and compositions are influenced by many genres, ranging from jazz, rock, new classical music, electronic music, and the Caribbean and Latin American folklore.

Vicéns has been featured at venues and festivals such as Puerto Rico Heineken Jazz Fest, SF Jazz Center in San Francisco, Ljubljana Jazz Festival in Slovenia, Uno Jazz San Remo Festival in Italy, and the Festival Havana World Music in Cuba. In New York, he frequents prominent venues such as The Cell Theater, Cornelia Street Cafe, Latea Theater, Fat Cat, The Owl Music Parlor, and Terraza 7 both as a leader of his own groups and as a sideman. He is a member of the free improvisational collaborative group No Base Trio, alongside alto saxophonist Jonathan Suazo and drummer Leonardo Osuna. Vicéns has performed and worked with artists such as Alex Sipiagin, David Sánchez, Miguel Zenón, Luis Perdomo, Paoli Mejias, Will Vinson, Rudy Royston, among others. Internationally, he has performed throughout Slovenia, Italy, Cuba, Puerto Rico, and the states.

As a painter, Vicéns is currently studying at The Art Students League of New York with renowned artist Pat Lipsky and has shown his work in many venues throughout the city. In 2018, Vicéns was invited to participate in the group exhibition Dislexia Geografica held at The Clemente Soto Vélez: Cultural and Educational Center featuring a wide range of artists from Latin America. Currently, Vicéns is actively painting and working on a project comprised of composing music inspired by his paintings and crafting paintings inspired by his music.

Vicéns holds a Bachelor of Music degree from the Conservatory of Music of Puerto Rico, a Master of Music degree from Queens College and is currently pursuing a Doctor of Musical Arts degree at Stony Brook University. He has released two critically acclaimed albums as a leader (Point In Time and Days) and is releasing his third album in January 2021. Entitled The Way We are Created, his upcoming record will feature compositions influenced by folklore music from Puerto Rico, featuring saxophonist Roman Filiú, pianist Glenn Zaleski, bassist Rick Rosato, drummer E.J. Strickland, and percussionist Victor Pablo. Show less

“A rising jazz guitarist... Vicéns has provided a splendid recording that conveys a clear representation of his culture and individuality” Mark F. Turner, All About Jazz

“Puerto Rican guitarist Gabriel Vicéns shows signs of being one of the new aces of mainstream guitar” Mark Keresman, Jazz Inside Magazine

“A thoughtful improviser with a quiet tone who makes every note count” Scott Yanow, Downbeat Magazine

“Gabriel Vicéns is an exceptional artist, with a shimmering sense of sonority and the ability to find a keen balance between poetry and intensity” Raul Da Gama, Latin Jazz Network 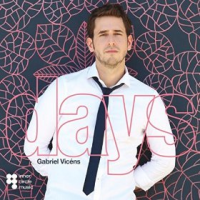 From: Point in Time
By Gabriel Vicéns

All About Jazz musician pages are maintained by musicians, publicists and trusted members like you. Interested? Tell us why you would like to improve the Gabriel Vicéns musician page.