Guitarist, composer, born in Sicily and since 1965 resident in Friuli (North-Italy). The period of his debut dates back to the beginning of the seventies when he carried out a long experience in the jungle filled with many rock and funky bands. At the beginning of the eighties he recorded two albums with well known singers from his home town. Then (83/85) he devoted himself entirely to jazz music tanks to work in collaboration with musicians as Bruno Cesselli, U.T.Gandhi, Giovani Maier, Glauco Venier and many others.

In 1985 he obtained his degree in Architecture. In 1990 he partecipated , as a composer, in production of a New-Age CD distribuited in Europe (The Course of Seasons). Throughout his music career he can I also boast a long experience carried out in several recording studios.

He mainly studied as autodidact but he also attended the “Umbria Jazz Clinics Berklee”(90), the International Courses of Cividale (91), the Workshops of Siena-Jazz (92/93) and the Courses of the “Suono Improvviso” (Venice 91/93) where he received a scholarship. During this period he had the opportunity to attend the lessons of great guitarists such as Jim Hall, Mick Goodrich, Peter Bernstein, Jerry Bergonzi, Mike Stern, Umberto Fiorentino, Sandro Gibellini, Rick Peckam, Rory Stuart and many others.

. He collaborated with Orchestra Filarmonica di Udine e del Friuli V.G.. He performed in radio and television programs and in important international performances such as the Udine jazz and the Jazz Festival of Vienne (France). He has a major didactic experience and and currently contributes to the musical magazine Axe. Show less 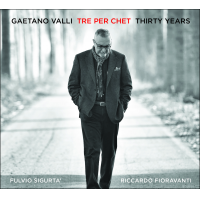 All About Jazz musician pages are maintained by musicians, publicists and trusted members like you. Interested? Tell us why you would like to improve the Gaetano Valli musician page.