Born in 1978 in Kranj. He started his music career by learning trumpet at the Kranj music school. Towards the end of the primary school he got his first drums. He immediately started playing in the local jazz band. Later he joined the local brass band, and after graduating from the secondary school of economics he decided to go to the Bruckner Conservatory in Linz, Austria. He studied with acknowledged musicians like Doug Hammond, Harry Sokal and Alan Praskin. After he graduated, he left for postgraduate studies in New York. He decided to study at the acknowledged university The City College Of The City University Of New York. In the metropolis of jazz he learned from giants of jazz like Billy Drummond, Andy Watson, Victor Lewis and John Patitucci with a grant from the Ministry of Culture and the Ministry of Education and Sport of the Republic of Slovenia. On 3 June 2005 he received the Master of Arts degree. Currently he lives and works in New York for the sixth year. He performs with various ensembles, takes part in high quality music projects, thus familiarising himself with various musical genres. He has worked with top notch musicians like: Vincent Herring, Jeremy Pelt, Lew Tabackin, Boris Kozlov, Reggie Workman, Sheila Jordan, Jonathan Kreisberg, Jotam Silberstein, Grant Stewart, Matt Brewer, Jimmy “The Preacher” Robins, Amedeo Tomassi, Igor Bezget, Nikola Matošić, Jure Pukl, Robert Jukič, Greentown Jazz Band, Boško Petrović, Stjepko Gut, Jani Moder, Kristina Oberzan, Igor Lumpert, Lenart Krečič, Peter Mihelich, etc

. He is also becoming increasingly recognised as a composer and arranger in the ensembles he leads. 2008 is a very important year for Gasper, who started to present himself as a leader, arranger, composer, producer and, of course, a drummer on two albums: “CAUTION! Hard Hat Area!” released by Arabesque Records from New York, and “The Swingers Of Jazz” released by Goga Musica from Slovenia. Show less 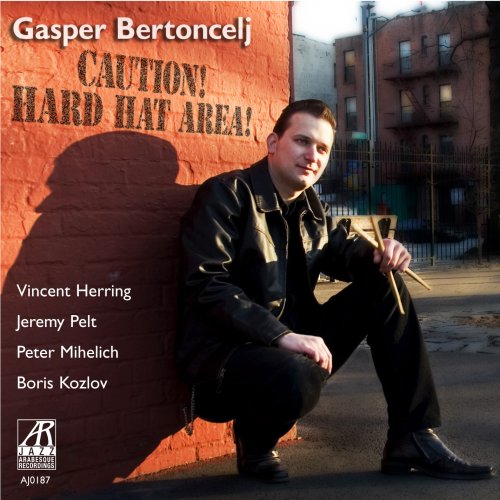 The Swingers Of Jazz:...

All About Jazz musician pages are maintained by musicians, publicists and trusted members like you. Interested? Tell us why you would like to improve the Gasper Bertoncelj musician page.