Over decades, Gene Bertoncini has firmly established himself as one of the most eloquent and versatile masters of the guitar. With elegance and ease, he bridges jazz, classical, pop, and bossa nova styles, integrating his own spontaneous and tasteful improvisations along the way. He has earned highest critical acclaim for his artistry on both the classical and electric guitar.

Bertoncini’s musical roots go back to his early years in the Bronx where he grew up in a house filled with music. His love affair with the guitar began when he was seven, and by the time he was sixteen, he was appearing on New York television.

His career took an unusual turn when he decided to fulfill another long-standing interest, and took a degree in architecture at Notre Dame. He was quickly swept into the musical scene at the university, and the first thing he did after picking up his degree was to work opposite Carmen McRae in Chicago. He returned to New York to work with vibraphonist Mike Manieri, and then with a quintet led by drummer Buddy Rich.

He describes his architectural experience as something which gives his music its finely-wrought form and style. He wins continual praise for the superb structure of his arrangements and improvisations which serve as a vehicle for his virtuosic technique.

Gene Bertoncini has worked with the Metropolitan Opera orchestra, the Benny Goodman Sextet; singers Tony Bennett, Morgana King, Lena Horne, Vic Damone and Edye Gorme; jazzmen Buddy Rich, Wayne Shorter, Hubert Laws, Clark Terry, Paul Desmond, and Paul Winter; and arranger/composers Burt Bacharach, Lalo Schifrin and Michel LeGrand, among others. He performed regularly on the Merve Griffin and Johnny Carson shows, and has been one of the most prolific and popular studio musicians in New York City. For the past eight years Bertoncini has performed with bassist Michael Moore in a duo which The New York Times describes as “...one of the finest pairings of jazz strings....”

Mr. Bertoncini’s teaching credits include the Eastman School of Music where he regularly performs and conducts summer workshops for jazz guitarists, the New England Conservatory, New York University, and the Banff School of Fine Arts. He has been a highly sought-after guest clinician in colleges and universities throughout the country. Show less

Gene Bertoncini and Roni Ben-Hur Duo at the Rubin Museum

Gene Bertoncini: The Architecture of Jazz 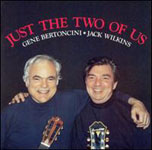 Just the Two of Us

All About Jazz musician pages are maintained by musicians, publicists and trusted members like you. Interested? Tell us why you would like to improve the Gene Bertoncini musician page.