Chicago guitarist, Geordie Kelly, has been described as a first-class, gifted guitarist and composer (Vic Juris). He has been privileged to share the stage with artists such as Larry Coryell, Ed Calle, Bobby Shew, Phil DeGreg, Maureen McGovern, Frank Mantooth, Bob Bowman, Ritchie Cole, Little Anthony and the Imperials, The Virginia Symphony Orchestra, and The Turtle Island String Quartet. He was also a founding member and performer with the jazz combo “Skipjack Trio” in The United States Navy Band in Washington, D.C.

His teaching and academic résumé includes having taught guitar, jazz improvisation, jazz combo performance techniques, and jazz ensemble performance techniques at the Armed Forces School of Music. Selected as a guest clinician, he presented portions of his research on the performance techniques of Joe Pass at the 1997 IAJE Conference in Chicago, Ill. Later that same year, he published a transcription of In a Mellow Tone from Joe Pass' Portraits of Ellington album in Down Beat.

Geordie studied guitar with Jimmy Bruno, and holds music degrees from East Carolina University and the University of Kentucky.

He has performed extensively in North America, Europe, Asia, and in parts of Africa; 56 countries and counting. His recordings have met with tremendous success all over the world including Canada, Australia, The Netherlands, Italy, Switzerland, Japan, Spain, Denmark, Sweden, Norway, Estonia, South Korea, and Israel.

Recognized internationally as a first-class jazz guitarist and composer, he earned the prestigious honor of becoming a Heritage Guitars Artist (since 2001). Show less

“Geordie is a gifted guitarist and composer, first class all the way!” 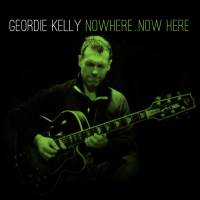 All About Jazz musician pages are maintained by musicians, publicists and trusted members like you. Interested? Tell us why you would like to improve the Jay Hoggard musician page.