Five tracks of top-flight improvisation confirm that British baritone saxophonist George Haslam is one of the mainstays of his instrument; Ken Waxman, Jazz Week, Canada

“On baritone Haslam is a great awesome force. Why has George Haslam never gotten his due? He's one of the outstanding improvisors of our age.” Cadence,USA

“Pretty much anything that George Haslam plays on is guaranteed to be worth listening to and this is no exception.” Jazz Views UK

“George Haslam is one of the most interesting bari sax players to go beyond traditional stylings and explore the low range of the free.” Beyond Coltrane

“Haslam proves himself to be an excellent baritone player” Rockerilla, Italy

“Haslam possesses an attack and timbre that speaks directly to the blues roots of his music” Cadence, USA

“The sensitivity and attack of Haslam” Jazz Passion, Switzerland

“One of the finest musicians currently developing the art of improvisation ........authoritative and highly sensitive” Wire, UK

“One of the lesser known but more important voices on the saxophone” Jazz till Twelve, Ukraine

“The last time I encountered so conversational a form of improvisation was in a rematch of the Giuffre-Bley-Swallow trio” Jazz on CD, UK

“He has a gruff smoothness and boppish dexterity on baritone sax that is as virtuosic as Gerry Mulligan” Cadence, USA

“Haslam has carved his reputation from his musical handling of the rich throaty baritone saxophone” The Standard, Hong Kong

“In the duet with Haslam,” furious free-jazz playing from (Howard) Riley meets with sympathetic and white hot response, managed without the reedsman sacrificing the warmth and richness of his tone” Wire, UK

“Skill liberates him but he stays in control and his solos were worth being repeated immediately so that the listener could capture his whole thought” Clarin, Argentina

“The real challenge for a jazz musician playing unaccompanied solo concert was for Haslam a smooth path of harmonious and rhythmic richness which can only be found in those who have made the journey between what is academic and what is new” La Capital, Argentina

“Haslam, the root of this whole celebration, shows off his fat, unusual tone and his gift for the simplicity of folk like improvisation” Cadence, USA 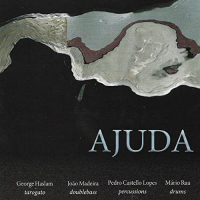 All About Jazz musician pages are maintained by musicians, publicists and trusted members like you. Interested? Tell us why you would like to improve the George Haslam musician page.