George Russell is a hugely influential, innovative figure in the evolution of modern jazz, the music's only major theorist, one of its most profound composers, and a trail blazer whose ideas have transformed and inspired some of the greatest musicians of our time.

Russell was born in Cincinnati in 1923, the adopted son of a registered nurse and a chef on the B&O Railroad. He began playing drums with the Boy Scout Drum and Bugle Corps and eventually received a scholarship to Wilberforce University where he joined the Collegians, whose list of alumni include Coleman Hawkins, Benny Carter, Fletcher Henderson, Ben Webster, Cootie Williams, Ernie Wilkins and Frank Foster. But his most valuable musical education came in 1941, when, in attempting to enlist in the Marines, he was diagnosed with tuberculosis, spending 6 months in the hospital where he was taught the fundamentals of harmony from a fellow patient. From the hospital he sold his first work, “New World,” to Benny Carter. He joined Benny Carter's Band, but was replaced by Max Roach; after Russell heard Roach, he decided to give up drumming. He moved to New York where he was part of a group of musicians who gathered in the basement apartment of Gil Evans. The circle included Miles Davis, Gerry Mulligan, Max Roach, Johnny Carisi and on occasion, Charlie Parker. He was commissioned to write a piece for Dizzy Gillespie's orchestra; the result was the seminal “Cubano Be/Cubano Bop” the first fusion of Afro-Cuban rhythms with jazz, premiered at Carnegie Hall in 1947 and featuring Chano Pozo. Two years later his “Bird in Igor's Yard” was recorded by Buddy DeFranco, a piece notable for its fusion of elements from Charlie Parker and Stravinsky.

It was a remark made by Miles Davis when George asked him his musical aim which set Russell on the course which has been his life. Miles said he “wanted to learn all the changes.” Since Miles obviously knew all the changes, Russell surmised that what he meant was he wanted to learn a new way to relate to chords. This began a quest for Russell, and again hospitalized for 16 months, he began to develop his “Lydian Chromatic Concept of Tonal Organization.” First published in 1953, the Lydian Concept is credited with opening the way into modal music, as demonstrated by Miles in his seminal “Kind of Blue” recording. Using the Lydian Scale as the PRIMARY SCALE of Western music, the Lydian Chromatic Concept introduced the idea of chord/scale unity. It was the first theory to explore the vertical relationship between chords and scales, and was the only original theory to come from jazz. Throughout the 1950's and 60's, Russell continued to work on developing the Concept and leading bands under his direction. In the mid-fifties, a superb sextet, including Bill Evans and Art Farmer recorded under his direction, producing “The Jazz Workshop,” an album of astonishing originality; the often dense textures and rhythms anticipated the jazz-rock movement of the 1970's. Click for larger imageDuring this time, he was also working odd jobs as a counterman in a lunch spot and selling toys at Macy's at Christmas; the release of “The Jazz Workshop” put an end to Russell's jobs outside of music. He was one of a group to be commissioned to write for the first annual Brandeis Jazz Festival in 1957—”All About Rosie” was based on an Alabama children's song. “New York, New York,” with poetry by Jon Hendricks and featuring Bill Evans, Max Roach, John Coltrane, Milt Hinton, Bob Brookmeyer, Art Farmer and a Who's Who of the New York jazz scene is striking in it evocation of the New York of the late fifties. From 1960, Russell began leading his own sextets around the New York area and at festivals; he also toured throughout the Midwest and Europe with his sextet. One of the important albums of this time was “Ezz-Thetic,” which featured Eric Dolphy, Don Ellis and Steve Swallow.

Disillusioned by his lack of recognition and the meager work opportunities in America, he arrived in a wheel chair in Scandinavia in 1964, but returned five years later in spiritual health. In Sweden and Norway he found support for both himself and his music. All his works were recorded by radio and TV, and he was championed by Bosse Broberg, the adventurous Director of Swedish Radio, an organization with which Russell maintains a close association and admiration. While there, he heard and recorded a young Jan Garbarek, Terje Rypdal, and Jon Christensen.

In 1969, he returned to the States at the request of his old friend, Gunther Schuller to teach at the newly created Jazz Department at the New England Conservatory where Schuller was President. He continued to develop the Lydian Concept and toured with his own groups. He played Carnegie Hall, the Village Vanguard, the Bottom Line, Newport, Wolftrap, The Smithsonian, Sweet Basil, the West Coast, the Southwest, and Europe with his 14 member orchestra. He continued to compose extended works which defined jazz composition. His 1985 recording, “The African Game,”one of the first in the revived Blue Note label, received two Grammy nominations. Russell has taught throughout the world, and has been guest conductor for Swedish, Finnish, Norwegian, Danish, German and Italian radio.

In 1986, he was invited by the Contemporary Music Network of the British Council to tour with an orchestra of American and British musicians, which resulted in The International Living Time Orchestra, which has been touring and performing since that time. Among the soloists of stature are Stanton Davis, Dave Bargeron, Brad Hatfield, Steve Lodder, Tiger Okoshi, and Andy Sheppard. The musicians have developed a rare understanding of the music, astonishing audiences with fiery music both complex and challenging, but added to the dynamism and electric power of funk and rock. Russell himself is a tremendously visual leader, dancing and forming architectural structures with his hands.

The Living Time Orchestra has toured all over the world. Most recent projects included a performance at the Barbican Centre in London and the Cite de la Musique in Paris, augmented with string players from the U.K. and France, the Theatre Champs-Elysees for the Festival D'automne in Paris, the Glasgow International Festival, Queen Elizabeth Hall, Tokyo Music Joy, the Library of Congress, Festivals of Umbria, Verona, Lisbon, Milano, Pori, Bath, Huddersfield, Ravenna, Catania, North Sea, and many more.

Ditson Festival of Contemporary Music at Boston's Institute of... 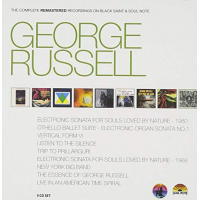 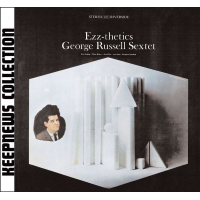 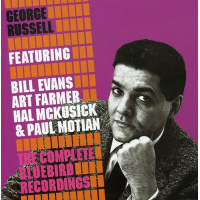 All About Jazz musician pages are maintained by musicians, publicists and trusted members like you. Interested? Tell us why you would like to improve the George Russell musician page.