Carroll's first brush with celebrity was when she was the model for “The Spirit of the Centennial” statue at the 1936 Texas Centennial Exposition at Fair Park in Dallas, Texas. The statue still stands in front of what is now The Women's Museum. She is a 1937 graduate of Woodrow Wilson High School in Dallas and has been inducted into the school's Hall of Fame, which is chock-full of distinguished graduates.

Carroll's acting career began in 1941 when she appeared in several uncredited small roles in films such as Maisie Was a Lady with Lew Ayres and Ann Sothern, Ziegfeld Girl with Judy Garland, as well as You're in the Army Now and Navy Blues, in both of which she appeared with the Navy Blues Sextette group.

Possibly her most visible acting role was as Betsy Ross in the James Cagney musical Yankee Doodle Dandy in 1942. She also did modelling during this time, appearing in advertisements for Jewelite hairbrushes, among other products.

In 1943, Carroll joined Kay Kyser's band, known as the “Kollege of Musical Knowledge”, as a featured vocalist. Capitalizing on her good looks, she was given the nickname “Gorgeous Georgia Carroll”, probably as a joking reference to the professional wrestler George Wagner, who used the name “Gorgeous George”. As a member of Kyser's band, Carroll appeared in three films: Around the World, Carolina Blues, and most notably the Second World War-era “morale booster” Thousands Cheer which gave fans a chance to see Kyser and his band in Technicolor. Kyser's band has a featured performance near the end of the film, with Carroll delivering a key solo interlude of the Arthur Freed/Nacio Herb Brown standard, “Should I?”

In 1944, Carroll married Kyser and made no further film appearances, retiring from performing in 1946; Kyser himself retired from performing in 1951. The couple, which had three children, remained married until his death in 1985. Carroll has lived in Chapel Hill since retirement. Carroll's picture can be seen on the 70th anniversary retro-style cans of Spam canned meat released in 2007. The company used a stock photograph not realizing the image was of Georgia Carroll. The University of North Carolina at Chapel Hill is custodian of a large archive of documents and material about Kay Kyser which was donated by Carroll. Show less 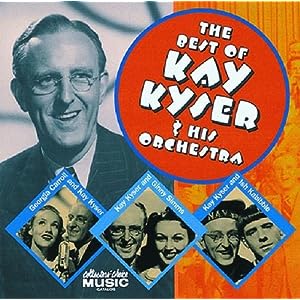 The Best of Kay Kyser...

All About Jazz musician pages are maintained by musicians, publicists and trusted members like you. Interested? Tell us why you would like to improve the Georgia Carroll musician page.