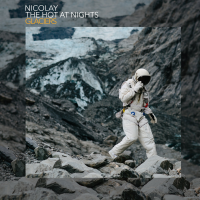 The first time I listened to Glaciers my computer followed up the last song with a Nicolette track from 1992, "A Single Ring", a dance track built off of a sample from a 1987 Madhouse song, "Seven" (itself a pseudonymous Prince side project). It is easy to interpret the coincidence as a philosophical wink from the music gods, since listening to Glaciers is as close as most of us will ever get to digging through the record collections of its players. Glaciers features a dizzying array of original ideas smartly weaving a wide swath of profound influences throughout. Glaciers is straight ride music - there isn't one song on this album that won't have its listening experience improved by playing it in a car going nowhere in particular - and this, too, isn't a coincidence. The firm of Boerner, Baglio, Douglas & Nic have been playing and touring together in various guises for years, refreshing their curriculum at every opportunity. There is always groove and lilt and a slick, knowing humor in their music, but it is always carried and earned through powerful musicianship. Most importantly, there is always reach, always an expansion of their musical agenda through complex arrangements and broad compositional risks. This has been true over a handful of albums from both The Hot At Nights and Nicolay independently, but never has their reach been as long as it is on Glaciers. There is a freedom to this album bordering on thematic, a sense of narrative pull that wants to take you somewhere as a movement. "Now The Coast Is Clear" and "Tell Me Something New" are both deceptively laconic songs, hinting at the sonic scope of the album to come, but without much in the way of bells or whistles. They rely solely on muscular songwriting here, with a tone that is vast. If landscapes could be made into soundscapes, the first three songs on Glaciers are Exhibits A-C. "The Current" gives us the shades of the softer side of Madhouse my computer was trying to tell me was there. Douglas' wind work carries the tune here, literally and figuratively, with a dense series of melodic glides that jump back and forth between a hopping jazz and something downright pastoral. "Behind Your Door" is the Tears for Fears jazz song you never heard but knew was out there the whole time. The workouts on here bear particular attention. "Pioneer 11", "Saturn", and "To See You Again" rip through their arrangements, popping up here and there in the mix just when you think Glaciers is going to stick to using its inside voice. On these tracks the band has truly leveled up. These are not experiments in Zappa-esque oddity or genre crams: these are grooves that have been wrung out for every color they contain, while managing to keep everything in perfect head-nodding lines. As an album mix goes, it's risky, but these musicians have always been daring. They have shown over and over again that they possess the chops and finishing moves to justify our faith in their leaps. As found in nature, glaciers are comprised of snow that, over thousands of years, compress into ice and move about, surging and retreating depending on what's happening underneath them. How a glacier moves is largely determined by its sheer weight, and the science of the metaphor holds up here on these tracks in at least two ways. First, every song on here is built up from private stock ingredients, compounded by their many influences, and, depending on how much pressure the players have applied to a particular idea, the music presses and recedes, changes direction, chips away at genre, and explores deeply the music that has come before it. Which music, you ask? Why, all of it. That's the creative listener take, the one that didn't know the other story going in. The other story goes like this: Much of the music for this album was lost in a hard drive crash and had to be reconstructed. Some tracks were built on top of the foundations and smoldering bits of previous incarnations, but because of professional schedules and unrelenting time, took a while to get down. This allowed for even more reflection and accumulated ideas to influence the work, adding layers in glacier-like fashion to the songs. In this sense, Glaciers is quite literally a distillation of craft and heart. As the album unfolds, the listener comes to root for the band to catch all of the stars they are clearly reaching for. The listener does this without knowing the story about computer crashes or valiant production efforts because ultimately the music conveys all of this. Glaciers proves that the group has not only unlocked their instruments, but their tongues, and is not just an album of experiments and ideas, but endless stories. -Scott Woods

The Garden Is My Stage

The End of August

All About Jazz musician pages are maintained by musicians, publicists and trusted members like you. Interested? Tell us why you would like to improve the Glaciers musician page.