Glenn Wilson has been a professional jazz saxophonist for more than 45 years. After completing his undergraduate degree from Youngstown State University in 1977, Glenn moved to New York City, where he worked and recorded with The Buddy Rich Band, Lionel Hampton Orchestra, Toshiko Akiyoshi Jazz Orchestra, Tito Puente, Machito, Bill Kirchner Nonet, Bob Belden Ensemble, and scores of other jazz and latin-jazz groups.

Glenn recorded his first CD as a leader, the highly-reviewed Impasse, in 1984 for Cadence Records. In 1988, Glenn began his association with Sunnyside Records with the release of Elusive. Three more CDs with Sunnyside - Bittersweet, Blue Porpoise Avenue, and One Man’s Blues - as well as a recording for Timeless Records, Lee’s Keys Please, followed in the next decade.

Glenn also appeared on over 25 jazz recordings as a sideman during this time. Glenn’s CDs are featured in the Penguin Guide of Jazz and The Grammophone Guide to Good Jazz, and he has also received a National Endowment for the Arts Grant and has been featured in the DownBeat Magazine Critics Poll in the Baritone Saxophone category.

From 1991-2001 Glenn was an active member of the jazz community in Virginia, Washington DC, and Baltimore. He performed numerous times at The Kennedy Center and Blues Alley Jazz Club. In 1993 he recorded with pianist Bruce Hornsby on Harbor Lights and joined Bruce’s band. With Bruce, he was featured on “VH1 Center Stage,” “Austin City Limits” and “Arsenio Hall,” and received a gold record for his playing and arrangements on Harbor Lights. Glenn’s recording Devil’s Hopyard , with his group TromBari, (featuring trombonist Jim Pugh) was released in 2012 and Glenn released Timely on Cadence Jazz Records in 2015, which made many critics’ Album of the Year lists. His latest recording, Sadness and Soul, with pianist Chip Stephens, was released on Capri Records on October 18, 2019 and has been highly-reviewed.

Glenn leads an active touring schedule performing in concerts, clubs and workshops around the country. Glenn is currently Jazz Director at Illinois Wesleyan University (and proud to be a Titan), after teaching at the University of Illinois (where he earned a Masters in Jazz Performance) in the jazz department since 2006. Wilson’s non-profit, Further Jazz, Inc. produces jazz events in Illinois and beyond and is dedicated to fostering, promoting and advancing greater knowledge, understanding and appreciation of jazz music. Glenn can be reached at www.jazzmaniac.com

“The only recording of baritone saxophone and guitar duets in the annals of jazz. Creative and passionate” Jazz Times Magazine

“Wilson is back with a vengence. A ‘must-have’ for saxists” Jazz Times Magazin

My clinics combine improvisation with music business and have a healthy dose of Jazz Pedagogy thrown in. Directors seem to enjoy my help and students especially like the business side of jazz being incorporated into learning the music. 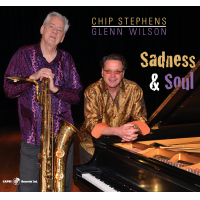 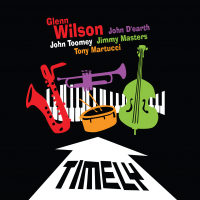 From: Sadness and Soul
By Glenn Wilson

From: Timely
By Glenn Wilson

All About Jazz musician pages are maintained by musicians, publicists and trusted members like you. Interested? Tell us why you would like to improve the Glenn Wilson musician page.