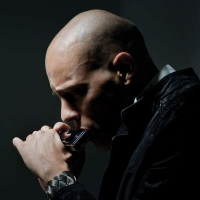 Grégoire Maret is the first class of Air France, champagne bubbles with a good dose of melancholy. And Edmar Castañeda is simply breathtaking. At his harp, he is an excellent bassist, guitarist, pianist at the same time. These two craftsmen establish an out-of-time dialogue, surprising, exciting.
—Le Monde

Grammy winner, Swiss born harmonica player and composer, Gregoire Maret moved to New York City at 18 years old to study at the New School University. Over the course of the past decade, Gregoire has emerged as a unique and compelling new voice across a wide spectrum of the modern jazz world. That his chosen instrument - the harmonica - is a relative rarity in the genre is one element in his singular sound, but far from the whole explanation. After all, the extensive list of heavy- hitters who have enlisted him for their own projects is unparalleled: Herbie Hancock, Pat Metheny, Cassandra Wilson, and Marcus Miller are some of his most prominent employers, none of whom have the patience to employ novelty for novelty's sake.

Along the way, Maret has redefined the role of the harmonica, finding fresh pathways through a remarkable variety of styles. Herbie Hancock has called Maret “one of the most creative musicians around,” while Marcus Miller has declared that he is “carrying the instrument into the 21st century with prowess, passion, and creativity.”

From: Resilience
By Gregoire Maret

From: Variations Of Relevance
By Gregoire Maret

All About Jazz musician pages are maintained by musicians, publicists and trusted members like you. Interested? Tell us why you would like to improve the Gregoire Maret musician page.