Originally from Allentown, Pa, Greg Snyder began studying classical guitar under the instruction of Ted Williams at age 11. While taking classical guitar lessons, Greg was learning his favorite radio tunes by ear, and, not too long after, he got his hands on his first Fender Stratocaster. This led him to his traditional blues and jazz training from Gus Schnabel before he made his move to Philadelphia to study Jazz Performance at Temple University. Studying under Tom Giacabetti and Terell Stafford, Greg quickly became a premier guitarist, in the Philadelphia area. He had the privilage of performing in master classes with Clark Terry, Antonio Hart, Conrad Herwig, Jimmy Heath, Steve Davis, and many others. He has performed at the Kenedy Center, the Kimmel Center, the Midwest Jazz Clinic, the July 4th Welcome America Festival in Philadelphia, Musikfest, The Steel Stacks, Mayfair, Beleve Fest, the Lincoln Center, the Rainbow Room, the Liacourus Center, the Philadelphia Classical Guitar Society, The Allentown Symphony Hall, and many other local hotels, restaurants, bars, and music festivals in Philadelphia and the outlying regions. Greg has recently returned from a national tour of the musical The Color Purple.

Greg led his original rock/funk group, Nano 3 for 10+ years. He plays in many local bands and works with many other musicians such as; The Slicked Up Nines, James Day and the Fishfry, Dena Underwood, Ellipsis, The Jason O'Mara Group and My Name is August. Greg has had the privilege of playing with the great Goerge Rabbai and the great Gene Perla and has shared the stage with Duane Eubanks and Pat Martino. After graduating from Temple University with a jazz performance degree, Greg joined the faculty and continues to teach at the Conservatory of Musical Arts in Haddonfield, NJ. Greg currently teaches at LaSalle College Prep High School in Wyndmoor, Pa alongside a brilliant faculty. In the past, he has also taught briefly at Bishop Shanahan Catholic High School in Downingtown, PA, Paul VI Catholic High School in Haddonfield, NJ, and Bucks County Piano in Levittown, PA.

Greg has recorded with The Temple University Jazz Ensemble. The album is titled “Room 323”. He has recorded with the group My Name Is August, recording an EP titled “A Higher Place”. He has also composed and recorded soundtrack material for an independent film titled “Spitting Water”. In his youthful rocker days, he composed, recorded, and very locally and independently released four albums for his original rock/funk/fusion band Nano 3. These albums were titled “Fatmandu”, “The Orange Album”, “Transitions”, and “Live at 218”.

The Greg Snyder Trio is his latest focus. Composing since he was 14 years old, Greg has started to funnel those skills and enthusiasm into original compositions for the trio. His musical background is vast (classical, rock, blues, funk, RnB leading ultimately to jazz), so, you can imagine that the trio project has textures and shades from all of those styles. The album starts with an odd- meter composition that contains brief flashing inflections of the band Yes and of Yes guitarist, Steve Howe. The second song is an aggressive Afro-cuban number which can conjure up images of Kurt Rosenwinkel playing with Art Blakey. The third song is a Pat Metheny sounding number. The rest of the album ranges from a rock influenced number, to a dry acoustic RnB composition, to a Weather Report feel, to a Wayne Shorter vibe, to a Brian Blade vibe, to a John Coltrane ballad in the likes of Central Park West. in In The State Of Nature is a modern jazz album influenced by music that isn't necessarily modern jazz but always is securely grounded in the jazz genre. Expect to hear a lot and expect to hear something new.

The trio's home is Philadelphia, Pa, and you can catch the group at local venues in Philly, but you can also catch them in the greater outlying regions like Allentown, NYC, etc. Show less

Greg is an established private instructor at the Conservatory of Musical Arts in Audubon, NJ. Greg teaches beginner through advanced guitar lessons. Rates; $31 1/2 hour, $41 3/4 hour, and $53 for the hour. Greg's focus is to light the fire of enthusiasm for music and the guitar. He teaches all styles, but focuses on reading, theory and technique... and he makes it fun. He also sets a great example for his students in his performance side of things. 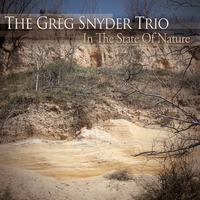 In The State Of Nature

All About Jazz musician pages are maintained by musicians, publicists and trusted members like you. Interested? Tell us why you would like to improve the Gregory Snyder musician page.