French musician and composer currently based in New York city, Guillaume started to play the guitar in his teenage years. Originally from Paris, he moved to Boston to study guitar and composition. In the Fall 2012. Upon his arrival at Berklee College of Music, Guillaume earned a scholarship, and had the opportunity to learn from some of the greatest musicians and teachers the school had to offer. In the Fall 2015, Guillaume graduated Summa Cum Laude and shortly after moved to New York city. While teaching and playing in New York, Guillaume has also been able to attend NYU Steinhardt as a graduate student and obtained his Master degree in Jazz Studies in the Spring 2019. As a guitarist, Guillaume has had the opportunity to perform in iconic New York venues such as The Blue Note, Minton's, Bar Lunatico and even performed a live set on the radio station WBGO. This past year, he has also been recording his debut album entitled “Sketches of Sound” which should be released in August this year.

Guillaume Muller jazz guitar New York City Sketches of Sound guitar Improvised Music modern jazz Bebop Swing Lullaby for a capybara
”With the kind of touch that makes you think what would happen if Bill Evans played guitar, this is a new fave on the rise”. (Chris Spector, Midwest Record)

“Muller is a fluid, lyrical guitarist, likely an emerging star in NYC for both his playing and composing. The tender, somewhat bluesy nature of his playing sets him apart” (Jim Hynes, Making a Scene Magazine)

“Guillaume Muller offers evidence of his growing importance in the jazz scene with this impressive recording of both his fine skill in playing the guitar and also his ability as a composer of note” (Grady Harp, Amazon Reviews) 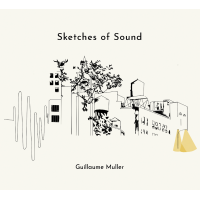 All About Jazz musician pages are maintained by musicians, publicists and trusted members like you. Interested? Tell us why you would like to improve the Guillaume Muller musician page.