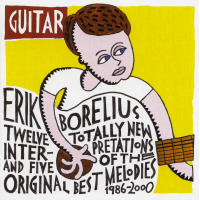 Pressrelease GUITAR (EB MUSIC 2000). The album is unusual in that eleven completely new versions of Erik’s favourite melodies are included. They are not remastered or remixed, but completely remade, from scratch. In addition, “Erik Borelius – Guitar” includes five original recordings and one completely new track. In total there are17 tracks and more than 73 minutes of music! Usually Erik is a sceptic when it comes to collections. He feels that every album has it’s own style and sound. At the same time, making a collection felt like a logical step after releasing six albums and Erik was inspired by the idea of recording the tracks from scratch and allowing them to be influenced by the feelings and the knowledge that he has today. With the new recordings, Erik has taken his original intentions with the melodies one step further. Much of the material has therefore received a new sound: “Duende” has become an even more heavy-beat spaghetti western track. The Flamenco guitarist Alberto Vicente helps put more heat into “Säg inte nej, Señorita” (Eng. “Don’t say no, Señorita”). More action has been added to the Bond inspired track “My Kind of Picture” and the melodies from Perfect Partners and Fantasy have been refined and received a richer character. Erik was very excited when he saw a book full of naivistic drawings by art director Johan Adelstål. “This is how I want the cover to look!” And so it was done! Every illustration and all the text in the 24 page booklet has been specially made for the album by Johan Adelstål! Erik has had the privilige of playing with many skilled musicians over the years and a number of them have participated on this album. Aare Pöder on keyboards, Johan Granström on bass, Christer Sjöström on drums and percussion and all the others have, with their ideas and their musicality, given the music an added dimension. “We have also had a lot of fun” Erik says. “Hopefully this comes through on the record!” Other musicians Per Lindvall drums on 5, 15, Fredrik Bergström on drums and percussion, Christer Nilsson harmonica on 9, Estelle Milburne vocals on 5.

All About Jazz musician pages are maintained by musicians, publicists and trusted members like you. Interested? Tell us why you would like to improve the Guitar musician page.