Gustav Lundgren is one of Sweden's most prominent jazz guitarists right now. He was born in Stockholm 1980, started to play guitar at age 12. He studied music in Stockholm, Bollnäs and Svalöv between 1996-2000. Gustav started to play at clubs around Stockholm at age 16 and made his first tour to Spain with his own trio at age 19. Between 2000-2010 Gustav toured Japan, USA, England, Brazil, France, Syria, Turkey, Scotland, Slovakia, Spain, Sweden, Denmark, Norway & Finland with different jazz groups. He has recorded over 70 CDs as a side man and over 20 solo albums. Gustav Lundgren has been working with names like: Chris Cheek, Jimmy Rosenberg, Jorge Rossy, Doug Weiss, Bill McHenry, Lelo Nika, Marian Petrescu, Rasmus Faber, Antoine Boyer & Gustavo Bergalli.

Gustav Lundgren is well known within Jazz, Gypsy-Swing and House. He has also composed & recorded music for TV commercials (MTV, TV4) and produced CDs for artists like Jelena Jangfeldt and Hot Club de Suede. Gustav has performed in both TV and Radio in many different countries including the USA.

Read more articles
”Gustav Lundgren is a world class guitarist who is creating his own swinging approach to music, combining elements from the masters with his unique sound, lines and technique. Keep your ears on the north, Sweden has a gem up there named Gustav Lundgren! “ / Jonathan Kreisberg

“He is a complete musician in absolute world-class.” / Smålandposten

”I just listen to your Videos, boy you sound fantastic! Great playing!! good stuff!! I think it's cool that you're playing that big guitar with no cut away the sound is excellent.” / John Scofield

“Gustav Lundgren, one of our best guitarists” / Swedish TV4 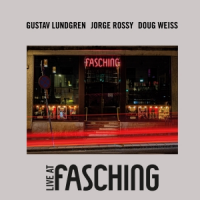 All About Jazz musician pages are maintained by musicians, publicists and trusted members like you. Interested? Tell us why you would like to improve the Gustav Lundgren musician page.