Gustavo Aguilar, percussionist, composer, and improviser, has been honing his craft as a music artisan for almost two decades.

His commitment to combining pre-composed (notated) and present-composed (improvised) musical elements has earned him the reputation as an 'intuitive, methodical mystic.' His music has been called 'beautiful, introspective and passionate,' 'thought-provoking and thoroughly fresh.'

He has worked closely with some of the most innovative composers of our time, including Ana-Maria Avram, John Bergamo, Chaya Czernowin, Anthony Davis, Iancu Dumitrescu, Julio Estrada, Art Jarvinen, Ann LeBaron, Annea Lockwood, and Roger Reynolds.

For well over a decade, Gustavo has dedicated himself to Creative Music - an approach to improvisation with roots that can be traced to the 1960s and to Chicago's African-American music organization, the AACM (Association for the Advancement of Creative Music). He has studied under, performed and developed a close working relationship with Creative Music luminary and AACM member, Wadada Leo Smith, appeared as a soloist/group collaborator at such festivals as the Ulrichsberger Kaleidophon International Jazz and Improv Festival (Austria), the Copenhagen Jazz Festival (Denmark), and the American Composer's Orchestra Improvise! Festival (NYC), and performed and/or recorded with such creative artists as John Bergamo, Anthony Braxton, Tom Buckner, Roy Campbell, Nels Cline, Anthony Davis, Mark Dresser, Lisle Ellis, Vinny Golia, Charlie Haden, Earl Howard, Kang Tae Hwan, Anne LeBaron, George Lewis, Mary Oliver, Park Jae Chun, Liz Phillips, and Adam Rudolph.

A Brownsville, Texas native, Gustavo has been on faculty at the University of California (San Diego), Del Mar College/Texas A&M Corpus Christi, Korea National University of the Arts, and The University of Akron, and has given lectures and master classes at universities and symposia across the United States and abroad. Over the years, his work has benefited from the support of the Ahmanson Foundation, Arts International, the Korean Ministry of Culture, the Los Angeles Cultural Affairs Department, National Presenter's Network, Ohio Arts Council, and the University of California.

Gustavo holds the position of Music Director with GroundWorks DanceTheater of Cleveland, Ohio - a position he has held since 1997 - and is Co-Founder and Co-Artistic Director of Tug, a documentary production and artist/performance collective that serves as a platform for his critical thinking and creative energies. Show less 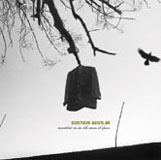 Unsettled On An Old...

All About Jazz musician pages are maintained by musicians, publicists and trusted members like you. Interested? Tell us why you would like to improve the Gustavo Aguilar musician page.