”Homme a tout Faire” That's the title that has been earned by this media man, GYLE WADDY

PHILADELPHIA, PENNSYLVANIA: Gyle Waddy was born in Philadelphia, Pennsylvania. He participated in different singing projects connected with his high school. At the age of sixteen he sang around in different clubs in Philly, while studing singing privately.

NEW YORK CITY, NEW YORK: After finishing high school he moved to New York City. On and off, during one year, he studied acting and singing when his studies were temporarily interrupted. Despite his obligation to enter the U.S. military service, for a four year period, he continued to act in different theater productions and sing around the cities where he was stationed.

It was during this period that Gyle got his first professional break acting in a Mattel Toys Christmas commercial. At age twenty-seven, he decided to launch himself into the show business world fulltime.

He went on to do other commercials: 'Lifesavers', 'Lincolin/Mercury' etc. His modeling and film acting career became more important, wherein he started getting more and more small roles in the film industry: 'Mahogony' with Diana Ross,, 'Busting' - M.G.M. with Charles Bronson, etc.

MILANO, ROME, ITALY: It was at the age of thirty that Gyle Waddy decided to move to Europe, and in Italy he worked in several comedy musicals including a tour to Germany and Switzerland with - 'Carmen Jones', etc., as well as working as an international model.

NEW YORK CITY, NEW YORK: After spending a year in Europe, he then moved back to New York City in 1973, some ten years after his first stay there. Plunging himself back into his studies he went to different schools for theatre, commercials, singing, dancing, while continuing his work as a model, actor, singer and dancer.

It was during this period that he became a member of various unions for people who work in the professional show business industry, i.e. EQUITY - A.F.T.R.A. - A.G.M.A. - S.A.G., where he is still a member.

As a model he worked as a runway model for 'Levis Straus' as photo model for 'Playboy' and others.

BRUSSELS, BELGIUM: In 1979 Gyle Waddy decided to return to Europe, this time to Brussels, Belgium, where he is currently based.

His accomplishments as an actor, singer, dancer and model somehow just didn't seem enough for him. Since he's been in Belgium he has choreographed fashion shows, films for TV as well as teaching modeling and dance.

The first group where Gyle became lead singer was The J.M.T. band, which was then changed to The G.M.T. Band. This band existed for four years. As a local band they became very well known. Their first recording was with RCA Records - 'Hold Me Tight', which in fact, was the first song where Gyle collaborated as a writer. Four years and several recordings later, which included the Gil Scott Heron hit 'The Bottle', he left the group and went on to sing as lead singer in other bands like The Formular Four and The Family Duck.

In 1985 he decided to form his own band, The Gyle Waddy Group with which he has been gigging with since. His cabaret and stage experiences have taken him from Philadelphia to Moscow.

In 1988 he recorded his first album, which is on his own record label and is published by his company Elyts Publishing. Despite his live gigging and writing career, he has kept up a very active recording schedule. For more information see his singing page.

WRITING CAREER: Gyle's career is vast. One of this numerous achievments, as a lyricist, is his collarboration with the winning Belgian brother team, Danny and Eddy Van Passel, with our three time gold record hit song 'Dying Inside (To Hold You) sung by Timmy Thomas who sang the hit 'Why Can't We Live Together?'.

'Sanae' is a one-act opera - written by Gyle. It's a love story which takes place in Japan just after the Hiroshima bombing.

'George Gershwin Time' is a one-man-biographical musical, tracing Gershwin's birth to his death. 'Nothing is Impossible', is a one-man musical which marks the transition from Africa to America of the Negro Spritual and Gospel songs to our present day. Both of these musicals were performed for and in the school system of Belgium for the Jeunesse Musicales.

Also as a writer, he has written a cookbook- manuscript, which exist in French 'Comment Manger Sans Viande' and in English 'Eating Without Meat'. To this date it has not been published. 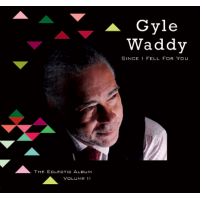 All About Jazz musician pages are maintained by musicians, publicists and trusted members like you. Interested? Tell us why you would like to improve the Gyle Waddy musician page.