Hakan Brostrom with the Norrbotten Big Band: “Episodes from the Future and the Past”

Following up on his 2010 quartet release “Refraction”, featuring pianist Joey Calderazzo, Art of Life Records is pleased to present, “Episodes from the Future and the Past”, a new live recording by saxophonist, composer and arranger Håkan Broström. The 72-minute album was recorded live by Swedish Radio on October 19th, 2012 at Folkets Hus, Haparanda, Sweden and October 20th, 2012 at Kulturens Hus, Luleå, Sweden and features the 16-piece Norrbotten Big Band in addition to percussionist Marilyn Mazur. All compositions and arrangements by Håkan Broström except “Byssan Lull” which was arranged by Håkan Broström. 24-bit Digital Mastering by Paul G. Kohler at Art of Life Studios in Charleston, South Carolina in May 2014.

Art of Life Records is pleased to present alto/soprano saxophonist and composer Håkan Broström's recording debut for Art of Life Records. Joining Håkan on “Refraction” are pianist Joey Calderazzo (Branford Marsalis), drummer Daniel Fredriksson and acoustic bassist Martin Sjöstedt. The album features a version of the song “Nothing Personal” written by pianist Don Grolnick which originally appeared on saxophonist Michael Brecker's self-titled recording debut in addition to a version of the song “See Saw” written by pianist Richie Beirach. Pianist Joey Calderazzo contributes two original compositions, “Catwalk” and “The Oracle”, in addition to two songs from bassist Martin Sjöstedt and three songs from saxophonist Håkan Broström. “Refraction” was recorded and mixed by Göran Stegborn on February 27, 2008 at Sami Studios in Stockholm, Sweden. 24-bit digital mastering by Paul G. Kohler at Art of Life Studios in Ridgeland, South Carolina in May 2010.

Håkan Broström started out on piano in his small Swedish home-town before, at the age of 15, he got ahold of a tenor saxophone in order to join a local blues band. Ever since then he has been playing saxophones of all sizes but early on he made the alto and the soprano his main instruments. While still a teenager he became a student at the College of Music in Malmö where one of his teachers was Helge Albin, alto saxophonist, composer and leader of the Tolvan Big Band. At this time Håkan co-founded the quintet Equinox which also featured tenor saxophonist Tomas Franck. After settling in Stockholm in 1984 Håkan soon established himself as one of the foremost saxophonists on the scene fronting his own combos and playing with the groups of trombonist Eje Thelin, trumpeter Gustavo Bergalli, guitarist Ulf Wakenius and others. He was also a member of the Swedish Radio Jazz Group, the Stockholm Jazz Orchestra and other big bands and he also played blues and reggae music with singer Peps Persson. In 1993 Håkan joined the ranks of the Norrbotten Big Band fronted by American trumpeter Tim Hagans. Besides leading the saxophone section on alto and soprano he is a heavily featured soloist and he also contributes arrangements and compositions. Over the years many well- known Swedish Jazz musicians have joined the groups led by Håkan Broström mainly playing music from his pen. Together with saxophonist Johan Hörlén, Håkan also fronts a quintet, Birdsongs, who plays music associated with Charlie Parker and the Bebop era. Show less 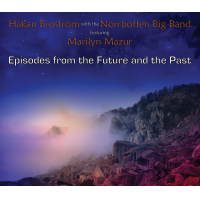 From: Episodes from the Future and...
By Hakan Brostrom
Last Updated: September 28, 2020

All About Jazz musician pages are maintained by musicians, publicists and trusted members like you. Interested? Tell us why you would like to improve the Hakan Brostrom musician page.