“Wainapel proves that he is amongst the most imaginative, sensitive and creative saxophonists of the post-Coltrane era…” —The San Francisco Examiner

Can a man serve two masters? If the cat in question is Bay Area reed expert Harvey Wainapel, and the disciplines are jazz and Brazilian music, the answer is a resounding yes. A supremely eloquent clarinetist and a saxophonist of unusual presence and power, Wainapel is a truly ambidextrous artist who has delved deeply into two vast and variegated traditions. Of course, musical currents have ebbed and flowed between the two continental nations for much of the past century, and Wainapel is fully at home at the confluence of those influences (he’s toured widely with Brazilian jazz giants Airto Moreira and Flora Purim). But most of the time he’s got his feet firmly planted in one country or the other, even if his experience in the south shapes his work as an improviser. “The Brazilian side injects a lot of emotion into my playing, and it opened up my concept of melody and harmony,” Wainapel says.

Wainapel (pronounced wine-apple) got his start as a jazz musician, and over the past three decades he’s collaborated with masters such as pianists Kenny Barron and McCoy Tyner, tenor saxophonist Joe Henderson, drummer Billy Hart, and fellow reed expert Joe Lovano. He made his recording debut as a leader with 1994’s At Home/On the Road (JazzMission Records), a critically hailed post-bop session exploring compositions by the likes of Woody Shaw, Sam Rivers, and Wayne Shorter. Wainapel followed up two years later with Ambrosia: The Music of Kenny Barron (A Records), featuring a suite of Barron’s tunes arranged by Jeff Beal for the Metropole Orchestra and a set of Barron’s Brazilian-inspired music for a sextet with Marcos Silva on keyboards. Kenny Barron himself was on hand for piano duties on Wainapel’s acclaimed 1998 straight-ahead quintet session The Hang (Spirit Nectar/JazzMission), which also features drummer Kenny Wollesen and the brothers Phil and Larry Grenadier on trumpet and bass, respectively.

Wainapel’s first full recording of Brazilian music was 2004’s New Choros of Brazil (Acoustic Music Records/Proteus Entertainment), a gorgeous duo collaboration with legendary Brazilian guitarist Paulo Bellinati. Rather than focusing on Brazilian standards, they assembled a program of previously unrecorded choros by masters like Sergio Assad, Guinga, Sergio Santos, and Dori Caymmi. “I’m really proud of it,” says Wainapel, who plays clarinet exclusively on the album. “That project gave me a lot of confidence.”

From Ellenville, New York, a small town in the Catskills, Wainapel started his musical journey on clarinet at the age of eight. By high school he had discovered jazz by playing along with tunes on New York City radio stations, and while he longed to play saxophone he didn’t get his first horn, an alto, until his freshman year at the University of Pennsylvania. Working at the college radio station, he experienced a series of epiphanies discovering the music of giants like Cannonball Adderley, Coltrane, and Joe Henderson.

Initially intending to follow the family tradition of pursuing a career in medicine or science, he ended up taking the plunge into music, trading the Ivy League for Berklee in 1971. It was a heady era, and Wainapel played with fellow students and future heavyweights such as guitarist John Scofield, pianist Kenny Werner, trumpeter Claudio Roditi, and tenor saxophonist Joe Lovano, with whom he toured Europe decades later. During his Boston years Wainapel also recorded and performed in Carnegie Hall with vibraphonist Gary Burton.

After two years at Berklee, when the opportunity came up to tour throughout Tunisia for two months with a Latin jazz band organized by drummer Jamey Haddad (who later went on to play in the groups of Dave Liebman and Paul Simon) Wainapel made the trip to North Africa; afterward he ended up settling in Amsterdam, where he dug the lifestyle and slowly started making a living at music.

After almost four years in Amsterdam Wainapel scored a full-time job with the HR Radio Big Band in Frankfurt, which brought him to Germany for a year. The experience proved valuable (“I learned how to play lead alto in that band,” Wainapel says), but by 1979 he was ready to return stateside. He landed in New York City, which is where he first became enamored with Brazilian music.

He quickly landed a gig playing in a Brazilian jazz ensemble led by Thiago de Melo, which also included the great Rio-born drummer Duduka da Fonseca and trumpeter Roditi. The band’s pianist Marcos Silva, turned Wainapel on to various other Brazilian artists. “The fever I contracted became very strong and hasn’t gone away,” Wainapel says. “In my case it became an obsession.”

Deciding he wasn’t cut out for New York, he determined to relocate to the San Francisco Bay Area, a move facilitated by a year on the road with Ray Charles. He settled in the East Bay in 1982, and quickly became one of the most in-demand players in the region. At the same time he’s kept a presence in Europe, including performances playing specially commissioned arrangements with the Klüvers Big Band (a.k.a. Aarhus Jazz Orchestra) in Denmark and the Metropole Orchestra in Holland. He’s also established himself as a singular presence on the Brazilian scene, spending at least a few months of every year there since 2000.

“The first time I went down I hardly knew anybody but I learned Portuguese, and now I can speak fluently though not necessarily correctly,” Wainapel says. “People sensed I was sincere. I started calling musicians saying that I want to record new songs, and many of my heroes were willing to do this with me. I want to reflect what’s happening now with the colleagues I meet, and they were kind enough to include me on their scene. There’s so much creative energy down there. You never get to the end of it.”

Back at home, Wainapel can often be found playing Brazilian music, performing with the great Rio-born vocal improviser Claudia Villela. He’s forged a particularly close creative connection with Seattle pianist/composer Jovino Santos Neto, performing widely as a member of his quintet and participating on three recent CDs, including the Latin Grammy-nominated Canto do Rio. Santos Neto spent 15 years in the band of seminal composer and multi-instrumentalist Hermeto Pascoal before relocating to the US. Other California-based Brazilian activities include Wainapel’s years-long partnership with Recife native guitarist/composer Carlos Oliveira, vocalist Sandy Cressman’s “Homenagem Brasileira,” and the Berkeley Choro Ensemble. Which isn’t to say that Wainapel has forsaken his jazz roots. He leads his own post-bop combos, freelances extensively, and performs with Beth Custer’s “Clarinet Thing,” an all-star clarinet quartet that also features Ben Goldberg and Sheldon Brown.

“I tend to think of myself as a late bloomer,” says Wainapel. “I’ve been at it a long time, but still have a lot of new sounds to share; if I can still add a little beauty to the world, I’ll be grateful.” Show less

“The performance aroused a standing ovation for what was two sets of intricately conceived and played compositions.”—L.A. JAZZ SCENE

“Wainapel plays with the performance attitude which for me is what jazz and improvisation is all about…it’s a pleasure to listen to Harvey’s soulful interpretations.”—JOE LOVANO

“The room is warm, the audience is happy, and he is good…Wainapel’s star shines brighter.” —SKY MAGAZINE (DELTA AIRLINES) Reviewed at La Villa (Paris, France)

“The performance aroused a standing ovation for what was two sets of intricately conceived and played compositions.”—L.A. JAZZ SCENE

“Wainapel plays with the performance attitude which for me is what jazz and improvisation is all about…it’s a pleasure to listen to Harvey’s soulful interpretations.”—JOE LOVANO

“The room is warm, the audience is happy, and he is good…Wainapel’s star shines brighter.” —SKY MAGAZINE (DELTA AIRLINES) Reviewed at La Villa (Paris, France)

CD: AMIGOS BRASILEIROS “★★★★1/2 Joyous music presented on this CD. Wainapel has created a compendium of a Brazilian stew of native musical genres sure to please anyone wanting to experience the best that this intriguing country offers to an American audience that has had little exposure beyond Bossa Nova.” —AUDIOPHILE AUDITION (online review)

“When an artist takes time to get involved profoundly with the culture and music of a foreign country, the results can be amazing. Harvey Wainapel has delved deep into Brazilian music, and the end product shows in his latest CD. In this album he is joined by some forty Brazilian musicians...Wainapel shows what he is capable of...they all have a great time with the music showcased in Amigos Brasileiros...a great accomplishment in Wainapel’s career.”

CD: THE HANG “★★★★ Wainapel delivers his best recording to date… it succeeds for all the right jazz reasons: impeccable arrangements, highly expressive execution and radiant ensemble fellowship.” —DOWNBEAT “This is an astonishing, exciting CD. It’s a monumental showcase for virtuoso jazz woodwind player Wainapel, who plays beautifully throughout… Plenty of heat but no compromise with melody here. Lots of grand solos but steady rich ensemble choruses too.” —SAN FRANCISCO EXAMINER

“Wainapel and Barron work particularly well together and maintain a sultry, almost mysterious groove throughout. Each of the soloists is given plenty of space to develop his ideas and the result is a consistent work of seductive beauty. Listeners won't be cheated by the 70 minutes of fine music performed on this recommended set.” —ALLMUSIC .COM

CD: NEW CHOROS OF BRAZIL “One of the most beautiful Choro albums to come along in many years. Considering the the caliber of these two musicians and their respective and complimentary talents, this should come as no surprise!”  — CONNECTBRAZIL .COM (online review)

“Wainapel demonstrates that the clarinet’s smooth, subtle breathiness is perfect for this setting, perfectly balancing the two instruments’ abundant and subtle charms. The whole set traverses all the emotions that choro is capable of; it looks like the choro as a form will continue to beguile countless listeners and musicians well into the 21st century and beyond.”

“Offers a better case for concert-hall jazz than many a Jazz at Lincoln Center affair.”—JAZZIZ

“An incredible saxophonist. If there was any justice in life, Wainapel would win a grammy for this recording.”—SAXOPHONE JOURNAL

“Wainapel proves that he is among the most imaginative, sensitive and creative saxophonists of the post-Coltrane era.”—THE SAN FRANCISCO EXAMINER

CD: AT HOME/ON THE ROAD “A musician with his own unique and deep sound.”—JAZZ LIFE (Japan)

“This is music that can be played again and again…a clear winner.”—CADENCE 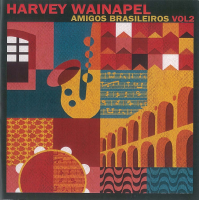 All About Jazz musician pages are maintained by musicians, publicists and trusted members like you. Interested? Tell us why you would like to improve the Harvey Wainapel musician page.