Hashem Assadullahi is a saxophonist, bandleader and music educator in New York City. Hashem has performed music ranging from the big band repertoire of the swing era, to straight-ahead styles, to contemporary projects performing the works of Ornette Coleman, The Art Ensemble of Chicago, John Zorn, and Tim Berne. In 2008 Hashem formed his Quintet, featuring some of the best musicians in the Pacific Northwest, along with trumpet icon Ron Miles. The group has since expanded to a sextet and has recorded two albums: Strange Neighbor (8bells) and Pieces (OA2 Records, 22097). Hashem has lead groups featuring some the world’s greatest talents in Jazz, including Alan Ferber, Ben Monder, Mark Ferber, and Rich Perry. In addition to his own releases, he has had the opportunity to record with several ensembles, appearing on the albums Live at Jo Fed’s with the Poisonous Birds (June 2008), The Turning Point with the Douglas Detrick Quintet (8bells, 015), as well as Walking Across (8bells,016), Rivers Music (Origin Classical, 33012), Awake, Awake (pending release), and The Bright and Rushing World (pending release) with the Anywhen Ensemble. In addition to performing, he has held positions teaching music courses and directing numerous ensembles at various institutions including Mahidol University in Salaya, Thailand, Lane Community College, and the University of Oregon

Hashem Assadullahi Returns from Thailand for Release of Debut Album...

“The ten tracks have variety that runs from attractive melodies to free playing, slapstick humor, 1920s German cabaret kitsch and what could pass for part of the soundtrack of an Italian Western…This is a substantial debut album for Assadullahi.” -Doug Ramsey- Rifttides

“The ten tracks have variety that runs from attractive melodies to free playing, slapstick humor, 1920s German cabaret kitsch and what could pass for part of the soundtrack of an Italian Western…This is a substantial debut album for Assadullahi.” -Doug Ramsey- Rifttides

“I put this album on in the car and didn’t take it out for days – reveling in the subtle surprises inherent in the compositions. Assadullahi’s use of space on tunes like “Stale Fortune” and the Wayne Shorter-esque opener “Hypothesis A – The Feign” is exemplary and the band interplay admirable. Miles is great, as we already know, but Assadullahi shows a keen sense of melody and some killer chops as well…Thoughtful music, with energetic bursts; I can’t wait to hear more from these exciting young players.” -Brad Walseth http://www.JazzChicago.net

“Their sound covers a variety of styles and moods but always keeps melody at its core. Compositions are thoughtful and complex without being unpalatable. Assadullahi and Miles play off each others ideas very well and show their skill while respecting the space at the same time. … sure to please even those new to progressive Jazz. The melodies are memorable and the solos will satisfy the hardest of Jazz fans while still convincing newbies that they’re staying withing the box.” -Kevin Tomanka, http://www.OregonMusicNews.com

“...their splendid new CD, Strange Neighbor, whose 10 original compositions span a variety of tempos, moods and colors, and display a spacious, probing compositional approach that invites listeners in rather than overwhelming them with virtuoso moves”. -Brett Campbell Willamette Weekly of Portland, OR 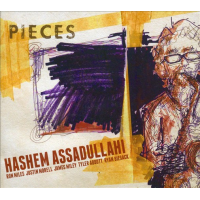 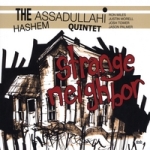 Hashem Assadullahi
The Poets Are Gathering

All About Jazz musician pages are maintained by musicians, publicists and trusted members like you. Interested? Tell us why you would like to improve the Hashem Assadullahi musician page.